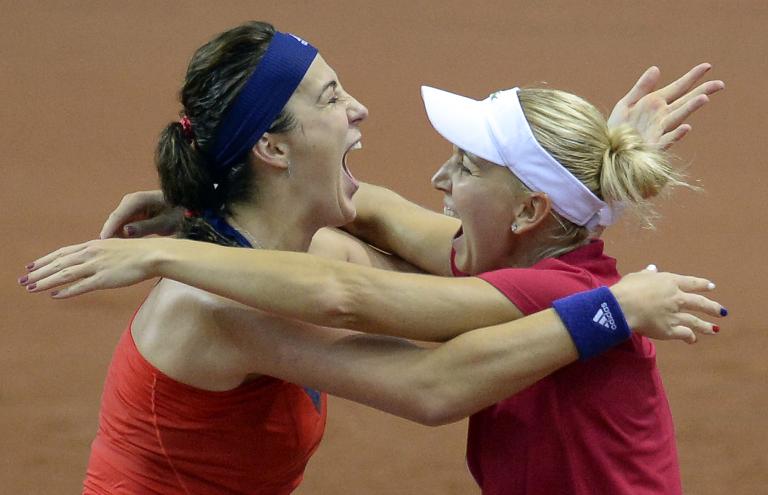 Elena Vesnina and Anastasia Pavlyuchenkova beat Sabine Lisicki and Andrea Petkovic in the deciding rubber of the Fed Cup World Group semi-final against Germany on Sunday to put Russia into the final.

Vesnina and Pavlyuchenkova won 6-2, 6-3 in one hour 24 minutes to earn a pass into the title match against the Czech Republic, who beat France in the other semi-final.

“I was a bit nervous at the start but I knew that together with Nastia (Pavlyuchenkova) we’re a good team,” Vesnina said.

“I watched Lisicki and Petkovic playing at Indian Wells last month and was ready for some of their moves.

“Besides, Nastia also played well even though she came on court right after her singles match.”

The Russian duo looked confident from the start, using more accuracy and mutual understanding in the opening set, which was over in 38 minutes.

In the second, the Russians still performed with more precision with Vesnina playing very aggressively at the net to set up an early 3-1 lead.

The German pair had a chance to change the course of the events as they broke back to level at 3-3 but the Russians moved up a gear to take three consecutive games and the second set sealing their victory with an ace by Pavlyuchenkova.

“I was obliged to win. Therefore I was nervous at first. But then I started winning my points,” Kerber said.

“The title which I won last week allowed me to feel confidenÑÐµ. That victory came at the right time.”

The 27-year-old Kerber, winner of the Charleston WTA event last week, behind aggressive tennis, while Pavlyuchenkova looked a bit tired after her Saturday’s three-setter being and was often out of position to defend her rival’s powerful drives from the base line.

Kerber, who broke twice to take the opening set in just 25 minutes, dominated play completely in the second taking it at love to send the tie into the decisive fifth rubber.

In Sunday’s opening match Petkovic reduced the arrears with a straight-sets victory 6-2, 6-1 over Svetlana Kuznetsova.

“I don’t know how I would have played yesterday, but I know that two (successive) days of play for me is not possible.

“The score tells nothing about this match. Some games in the first set were very close. Both of us showed very good clay court tennis during the first set.”

Petkovic, who is 11th in the WTA rankings, started confidently, alternating powerful drives from the base line with accurate drop shots, while Kuznetsova failed to match her solid performance.

In the second Petkovic underlined her supremacy on the red clay court of Sochi’s Adler Arena allowing her rival to take just one game in the set.

“I failed to adjust myself completely for the clay courts, that’s the main reason for my defeat today,” Kuznetsova said.

On Saturday Kuznetsova beat Goerges 6-4, 6-4 to put Russia into the lead, while Pavlyuchenkova battled back from a set down to defeat Sabine Lisicki to give her country a comfortable 2-0 lead.