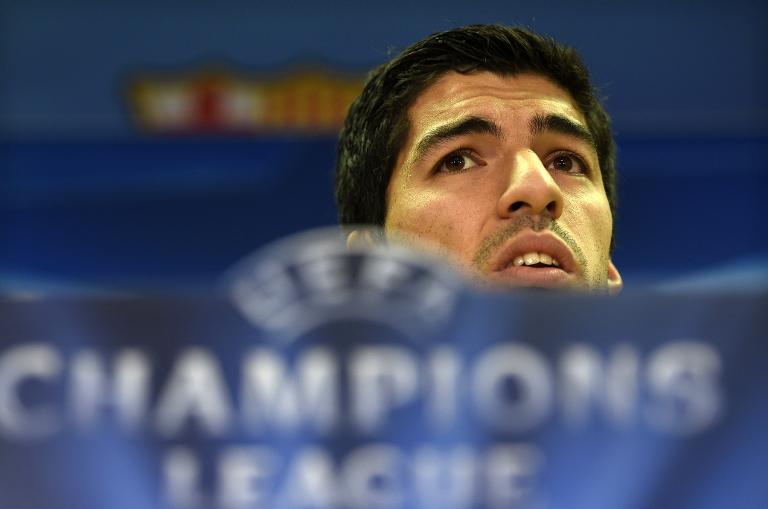 Barcelona striker Luis Suarez insists his side can’t relax when they host Paris Saint-Germain in the second-leg of their Champions League quarter-final on Tuesday despite holding a commanding 3-1 lead in the tie.

Suarez was the orchestrator of the French champions’ downfall in the first-leg at the Parc des Princes with two sensational individual goals to put Barca on the brink of a seventh semi-final in eight seasons.

However, the Uruguayan demanded the same level of intensity and concentration from his side to ensure PSG are given no encouragement at the Camp Nou.

“Nothing is done. We are aware that they have great players and we need to start with the same intensity that we did last week,” he said on Monday.

Suarez was also on target after less than a minute in a vital 2-0 win over Valencia to register his 12th goal in as many games, but was replaced by Pedro Rodriguez midway through the second-half.

He was taken off to keep him fresh with Barca embroiled in a bid to win the treble of La Liga, Champions League and Copa del Rey for just the second time in their history.

“We are sportsmen but we also get tired like any other person,” added the former Liverpool striker.

“We need to live with that tiredness in the best way possible. We need to eat well and rest, but I prefer to have a lot of games at this stage of the season than none.”

Suarez took time to get going in his new surroundings earlier in the season after Barca paid a club record fee to bring him to Catalonia.

The 28-year-old missed the first two months of the campaign as he completed a four-month ban for biting Giorgio Chiellini at the World Cup, but claimed he never felt the pressure of his price tag.

“I never thought about the fact I cost a lot of money because it would be very difficult. I am self-critical and I know when I am playing well or badly.

“There was a moment when I didn’t feel good, but I had my family and my teammates always supporting me and a coach that kept playing me.”

Suarez’s streak was overshadowed at the weekend as Lionel Messi reached another incredible milestone as he scored his 400th Barcelona goal in just 471 games.

And Barca boss Luis Enrique believes that is a figure that will not be bettered in Barca colours.

“Leo is in the best condition possible, he is in good form and 400 goals is a figure that more than impossible to achieve, it is impossible to imagine another player reaching. They are unique and unrepeatable numbers.”

Barca’s treble push has been built on a run of 22 wins and a draw in their last 24 games and Enrique is not content to just settle for progress to the last four on Tuesday.

“I always think positively and the objective is to go through, but I understand that is easier with the result we have.

“A victory against an opponent of this level is always well-earned. There were moments when we played very well and moments when we suffered, but I am not akin to settling for results that aren’t victories.”