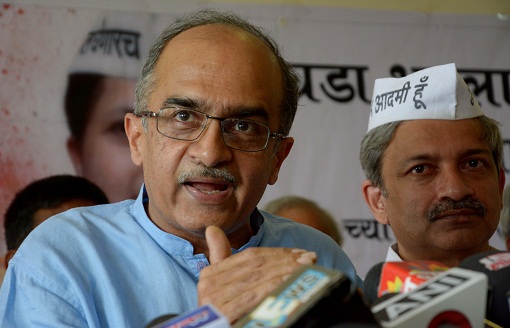 New Delhi:Â Dissident Aam Aadmi Party leader Prashant Bhushan on Monday delivered a stinging reply to the show-cause notice issued to him by the party’s national disciplinary committee, saying he wasn’t aware as to who constituted the committee and when and how it was done.

“It’s remarkable and ironic that you (Pankaj Gupta) along with Ashish Khetan and Dinesh Vaghela have sent this notice to us, styling yourself as the “National Disciplinary Committee”. I am not aware as to who has constituted this as the National Disciplinary Committee and when and how this was done,” Bhushan said in reply to AAP Secretary Pankaj Gupta.

“You know Pankaj that you along with Manish Sisodia and Sanjay Singh had issued a press release on March 10 accusing me and Yogendra Yadav of many of the same charges that have been made in your ‘Show Cause Notice’,” he added.

“Ashish Khetan planted stories for Essar in Tehelka. He wrote stories in favour of 2G accused. Essar paid Tehelka Rs 3 crore for its Thinkfest,” he said.

“Ashish Khetan had also levelled various charges against me which he subsequently apologized for,” Bhushan further said.

The AAP had earlier served show-cause notices to four senior members of the party, including Yogendra Yadav, Anand Kumar and Ajit Jha.

Yadav had, however, labelled the show-cause notice as a joke and a travesty of justice, saying the party had leaked its contents to the media before he received it.Â Yadav and Bhushan had earlier this week held a ‘Swaraj Samwad ‘ meeting in the national capital.

During the meeting, the duo, along with Shanti Bhushan, attacked the AAP leadership for not fulfilling promises, which it made earlier as a new political outfit.