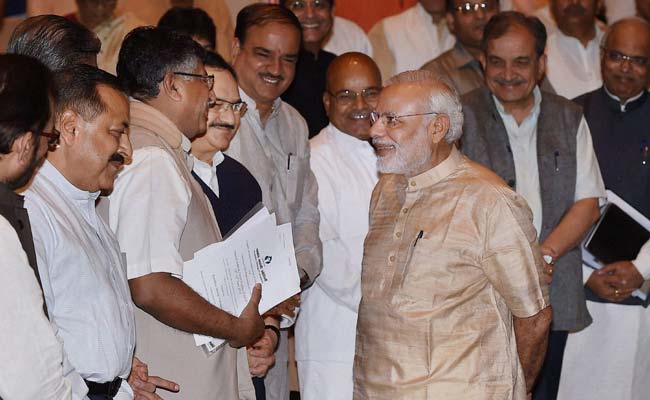 New Delhi: As Parliament reconvenes on Monday for what promises to be a stormy remainder of the Budget Session, Prime Minister Narendra Modi said he “looked forward to a productive session”.

The first half of the session saw a united Opposition determinedly blocking the land acquisition bill which the government would be hoping to pass in this session.

In an early morning tweet on Monday, the Prime Minister said, “Parliament session begins today. I look forward to a productive session, filled with constructive debates on several issues.”

On Sunday, Modi, while addressing a workshop for BJP lawmakers, said he hoped that the second half of the Budget session would be full of “outcomes”, noting that the productivity of Parliament had “reached 125 per cent” since his government came to power.

According to the schedule of business of the Lower House, Minister of State for Parliamentary Affairs Rajiv Pratap Rudy would lay a copy of the Right to Fair Compensation and Transparency in Land Acquisition, Rehabilitation and Resettlement (Amendment) Ordinance, 2015 today.

The ordinance was re-promulgated by President Pranab Mukherjee on April 3. The land ordinance had earlier been promulgated in December last year.

While the Lok Sabha meets on Monday, Rajya Sabha will meet on April 23.

Among the key legislations to be passed during this period will be the controversial Land Acquisition Bill, the Real Estate (Regulation and Development) Bill and the Constitution Amendment Bill for introduction of Goods and Services Tax (GST), among others.

The Prime Minister Narendra Modi-led National Democratic Alliance (ND) has a clear majority of 335 in the Lok Sabha but is weaker in the Rajya Sabha, with just 63 seats.

Both Houses will have 13 sittings each till May 8.