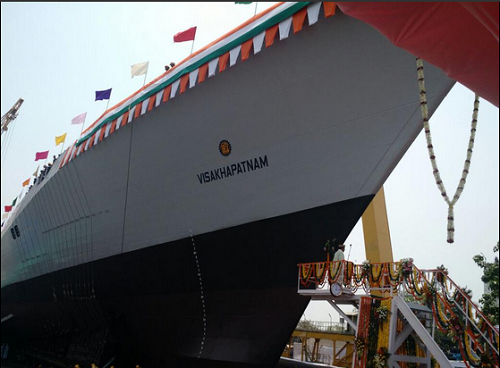 Mumbai:Â Indian Navy’s new destroyer, Visakhapatnam, with enhanced capability to operate in nuclear, biological and chemical atmosphere, was launched in Mumbai on Monday.

The ship is the first of the four follow follow-up order of the Kolkata class warships and will give a major flip to India’s maritime capabilities when it is inducted in 2018.

The total cost of the project is little over Rs 29,600 crore.

“Kolkata Class did not have a full-fledged Total Atmosphere Control System (TAC). The TAC system provides you with the capability of operating in a fall-out region, be it a nuclear, chemical or biological almost endlessly…because the complete air being taken inside is through nuclear, biological and chemical filters except in the machinery compartment,” Rear Admiral AK Saxena, Director General (Naval Design) said.

Those entering the machinery compartment in a fall-out region will have to wear specialised masks to protect themselves.

The ship, named Visakhapatnam (Project 15 B), a stealth destroyer, is 65% indigenous and has a number of weapon systems which have been made at home.

At 7,300 tonnes, Visakhapatnam will be the largest destroyer commissioned by the Indian Navy and will be equipped with the Israeli Multi Function Surveillance Threat Alert Radar (MF-STAR).

This will provide targeting information to 32 Barak 8 long-range surface to air missiles onboard the warship, that is being co-developed by India with Israel.

The Barak 8 missile is being integrated in to the Navy’s new destroyer, INS Kolkata and will be test-fired by October, Navy officials said.

The ship will also be carrying 8 BrahMos missiles. Project 15 and Project 15-B will share the same hull-design and Ukrainian-built Zorya gas turbines. Navy officials said the Visakhapatnam is likely to be inducted in the Indian Navy by 2018.