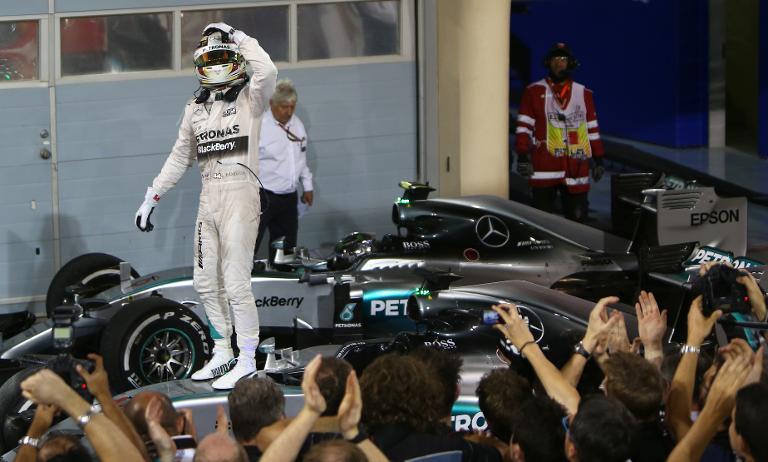 Defending world champion Lewis Hamilton made light of brake problems and a seamless switch from champagne to rose water on Sunday after winning the Bahrain Grand Prix to extend his lead in this yearâ€™s title race.

It was a measure of Hamilton’s success that after a flawless drive to his third win in four races this year he remained in control after opening up a 27-points lead ahead of Mercedes team-mate Nico Rosberg.

Starting from the 42nd pole position of his career, Hamilton led from lights to flag apart from two spells around the pit-stops to claim the 36th win of his career.

Hamilton came home 3.3 seconds clear of Finn Kimi Raikkonen of Ferrari who stole second ahead of Nico Rosberg when the second Mercedes driver suffered a braking problem on the penultimate lap.

It had seemed that the 29-year-old German would hold off Raikkonen’s late challenge, but both Mercedes lost their brakes in the final laps, Hamilton just hanging on to win.

“I’m gunning for a third title,” a beaming Hamilton said after the race. “The Ferraris gave us a run for our money here and it was difficult to look after the tyres out there, but I was able to pull through and we need to keep pushing now, as I know we will.”

Mercedes team boss Toto Wolff confirmed: “We lost the brakes on both our carsâ€¦ Lewis lost his during his final lap.”

Hamilton’s victory lifted him to 93 points in the championship, giving him a clear lead ahead of Rosberg, on 66 points with Vettel third on 65.

Mercedes lead the constructors’ championship with 159 points ahead of Ferrari on 107 and Williams on 61.

A disappointed Rosberg, who has won only once in 13 races, said: “It was okâ€¦ I enjoyed overtaking the red cars a lot. We were pretty similar with Lewis, but he pulled away a little bit towards the end and then I lost my brakes — so that cost me my position to Kimi, which was disappointing.”

Raikkonen, claiming his first podium finish for Ferrari since the 2009 Italian Grand Prix, said: “You’re never happy when you finish second, but after a difficult start of the year I’m pleased to get a bit better result.

“We came through in the end but we ran out of laps. We have to be happy with that after where we qualified, but we are looking for better results.”

Confirming the potency of Ferrari’s resurgence this year, Hamilton added: “Ferrari gave us a really good run for our money and we will need to keep pushing as a team.

“It was difficult to look after my tyres in the conditions. My brakes got a bit warm when I went behind a few back markers and there was no cool air coming in, but it wasn’t a major problem.”

Australian Daniel Ricciardo finished sixth for Red Bull, his engine blowing up as he crossed the line ahead of Frenchman Romain Grosjean of Lotus and Mexican Sergio Perez of Force India.

It was a bitter-sweet day for the struggling McLaren-Honda team with two-time champion Spaniard Fernando Alonso finishing 11th after 2009 champion Briton Jenson Button had been withdrawn before the start due to electrical problems.