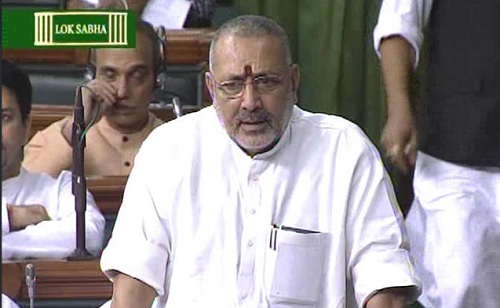 “If my comments have caused offence to anyone, I apologise,” Singh said as Sonia Gandhi looked on.

The opposition aggressively demanded Prime Minister Narendra Modi’s apology over the racial comments made by Singh, and BJP ally Sanjay Raut, forcing an adjournment in the Lok Sabha soon after the budget session resumed after a three-week break.

Congress leader Jyotiraditya Scindia said Giriraj Singh should be sacked for his comments on Sonia Gandhi.

Giriraj Singh has been widely condemned for saying earlier this month: “If Rajiv Gandhi had married a Nigerian lady and not a white-skinned woman, then would the Congress have accepted her leadership?”

Scindia said the comment insulted not just women of the country, but every citizen and also Nigerians.

“The minister should resign and Prime Minister should apologise to the house for such preposterous statements. Why is the PM onÂ maun vrat(silent?),” he said.

Union minister Venkaiah Naidu responded, “This kind of comment is not acceptable to anybody.”

As protests erupted from the opposition benches, Speaker Sumitra Mahajan said, “It’s not right to drag the prime minister into everything.”

She, however, also turned to Venkaiah Naidu and said, “But Venkaiah ji this should not happen. He should not say things that hurt others. I was also very saddened.”

The Congress also raised the comments made by Sanjay Raut, a leader of BJP ally Shiv Sena, who said recently that the voting rights of Muslims should be revoked as they were misused for votes.

Before the session began, PM Modi this morning appealed for cooperation from all parties. The government isÂ  bracing for a firestorm over its controversial land acquisition bill; the opposition has vowed to block what it calls an “anti-farmer” measure.