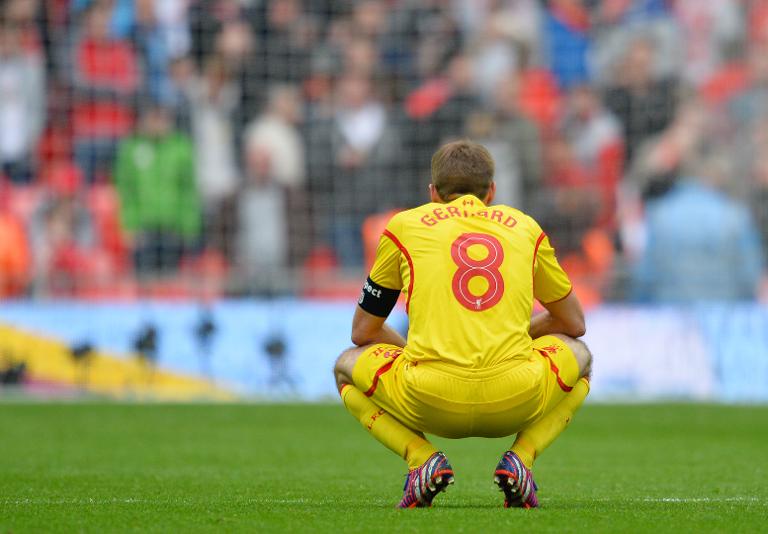 Steven Gerrard has accused his Liverpool team-mates of letting nerves affect them in their lacklustre FA Cup semi-final defeat against Aston Villa.

Brendan Rodgers’ side were well below their best at Wembley on Sunday as Villa recovered from Philippe Coutinho’s opener to book their place in the final thanks to goals from Christian Benteke and Fabian Delph.

Reds captain Gerrard, who is due to join LA Galaxy in the close-season, had been hoping for a victory that would have set up the prospect of a fairytale farewell in the final on his 35th birthday next month.

But that dream was shattered by Liverpool’s lethargic effort and Gerrard admitted he was disappointed with the way the team seemed to shrink on the big stage.

“We didn’t play, we looked very nervous for some reason,” Gerrard told talkSPORT.

“We’re a team that’s built on passing and playing it quickly but we were very disappointing in that aspect and they were much better than us.

“We were very disappointing. I thought Aston Villa were much better than us and that’s the overriding feeling after the game.”

With Liverpool’s last hope of winning silverware this season dashed in frustrating fashion, Gerrard will now focus on trying to lift his side into the Premier League’s top four to secure a place in the Champions League.

That won’t be easy with fifth placed Liverpool sitting seven points behind fourth placed Manchester City, albeit with a game in hand.

But, given the underwhelming nature of Gerrard’s own performance at Wembley, a tepid effort which suggested Rodgers has been right to start phasing out the ageing former England star, it is far from certain he will retain his place for Liverpool’s final six matches.

Rodgers’ own position will come under increasing scrutiny if Liverpool fail to qualify for the Champions League just 12 months after coming within a whisker of winning the English title.

While Rodgers has been hampered by the recurring injury problems of star striker Daniel Sturridge, he didn’t help himself by settling for Mario Balotelli and Rickie Lambert as his replacements for Luis Suarez after the Uruguay forward was sold to Barcelona last year.

Rodgers claims he needs time for his squad to gel, but he is unlikely to be given much longer to get it right.

He is the first Liverpool boss since Phil Taylor in the 1950s to go three years without winning a trophy and his team’s repeated failures in the biggest games do him no favours.

They choked away the title when the pressure was highest against Chelsea and Crystal Palace last season, then crashed out of the Champions League in the group stages this term, and lost ground in the top four battle in defeats against Manchester United, Arsenal and Chelsea.

Rodgers’ tactical switches have often been praised, but his tinkering backfired spectacularly against Villa as he baffled his players by changing formation several times before eventually admitting defeat in his decision to play lightweight winger Raheem Sterling as his lone striker.

“It looked as though the occasion got to us,” Rodgers said.

“That can happen and we’ve come up short in a few games. The focus can go awry and we were too passive.”

Rodgers is sure to be given money to spend in the close-season, but by then Gerrard will be sunning himself in California and Liverpool will be heading anxiously into a new era without their talisman.