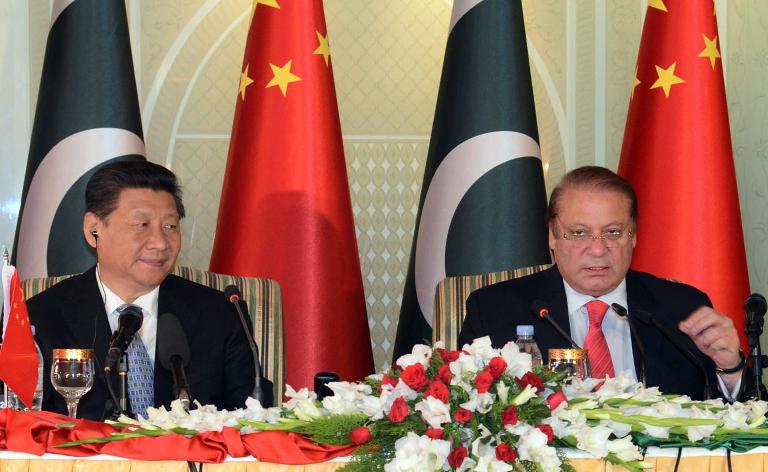 Chinese President Xi Jinping inaugurated a $46 billion investment plan in Pakistan on Monday that aims to create direct links between China and the Arabian Sea and boost the sluggish Pakistani economy.

Islamabad and Beijing hope the China-Pakistan Economic Corridor (CPEC) will transform Pakistan into a regional economic hub and bring growth to the restive western Chinese region of Xinjiang.

The corridor scheme is part of Beijing’s “Belt and Road” plan to expand its trade and transport footprint across Central and South Asia, while countering US and Indian influence.

The projected investments, $28 billion of which are due to be signed during the course of Xi’s visit, dwarf a US assistance package to Pakistan of $5 billion that began in 2010 but has made less impact than hoped.

They foresee the creation of road, rail and pipeline links that will connect China to the Arabian Sea, cutting several thousand kilometres off the route that transports oil from the Middle East.

The upgrade will stretch 3,000 kilometres (1,860 miles) from China’s western city of Kashgar to the Pakistani port of Gwadar, control of which was transferred to a Chinese public company in 2013.

Ahsan Iqbal, the minister overseeing the projects, said $11 billion has been set aside for infrastructure work, while the remaining $35 billion will go on energy projects. Much of the investment will be in the form of discounted loans.

After a lavish airport reception and afternoon talks, Xi and Sharif symbolically broke ground on five renewable energy projects around the country via video link before overseeing the signing of more than 50 agreements.

Xi said China was ready to “support Pakistan’s economic and social development”, while Sharif said the corridor would make Pakistan a “regional hub and a pivot for commerce and investment”.

“It will also enable China to create a shorter and cheaper route for trade and investment with south, central and west Asia and Middle East and Africa,” Sharif said.

Pakistan, a Muslim-majority country of 200 million that has been battling an Islamist insurgency for over a decade, hopes the Chinese investment will spur its long-underperforming economy, which the IMF projects to grow 4.3 percent this year.

The two allies have enjoyed close diplomatic and military relations for decades, though economic ties have only grown more recently. Bilateral trade crossed $12 billion last year compared to only $2 billion a decade earlier.

Iqbal said there were drawbacks associated with recent US aid, provided under the Kerry-Lugar-Berman Act (KLB).

“KLB was $1.5 billion per year, out of which only $600-700 million went to government. Most of it went to non-government sectors and the bulk went to American companies,” he said.

“That is a problem with assistance that comes through the aid mode.”

Andrew Small, author of “The China-Pakistan Axis”, a new book on the two countries’ relations, said that for Beijing, the corridor project offers a means of driving growth in China’s interior and helping stabilise Xinjiang at a time when fears of militancy are growing.

Opening up the Arabian Sea also diversifies China’s maritime trade routes, reducing what Beijing sees as to be vulnerabilities in specific choke-points such as the Malacca Straits, Small told AFP.

Pakistan has wrestled with chronic power shortages in recent years that have scrubbed several points off GDP growth and inflicted misery on the everyday lives of its citizens.

More than a dozen agreements were signed on power projects on Monday, including seven coal-based initiatives.

But some analysts have warned that the government has its work cut out turning the infrastructure projects into reality — particularly in Baluchistan province, where a separatist insurgency has raged for a decade.

“I just hope that Beijing’s big-ticket projects are matched by Islamabad’s clear commitment and action on the ground,” said Sherry Rehman, an opposition lawmaker and director of the Jinnah Institute think tank.

Questions of regional security will also be high on the list during discussions between the two leaders.

China is wary of the infiltration of militant Islamists from Pakistan to Xinjiang and may be looking from greater assurances from Islamabad on the matter.

Xi hailed Pakistan’s efforts to tackle militancy and reiterated China’s willingness to support the Afghan government in reconciling with the Taliban.