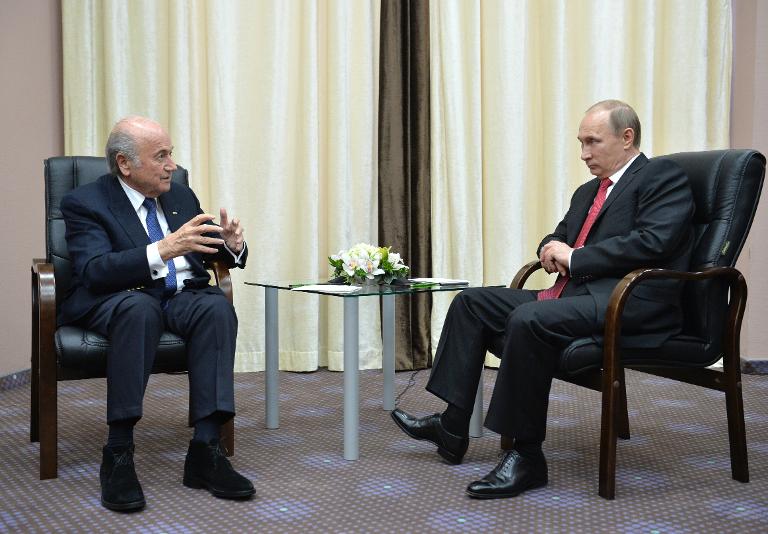 FIFA boss Sepp Blatter on Monday hailed Russia’s “five star” work to be ready for the 2018 World Cup while President Vladimir Putin vowed his country would not disappoint football fans around the globe.

The two discussed the tournament during talks on the sidelines of a sports convention in the Russian resort of Sochi.

Russia’s economic troubles and sanctions over Ukraine have clouded the preparations, but Blatter said “the economic problems will be overcome” and congratulated Putin on progress made on the 12 venues in 11 cities that will host the tournament, Tass news agency reported.

“You and the steering committee deserve five stars,” Blatter said, dismissing budget cuts made due to the economic crisis.

The Russian organisers have had to cut hundreds of millions of dollars from the World Cup budget as the price of oil, the country’s main export, has collapsed.

Blatter has repeatedly spoken out against a boycott of the World Cup because of Russia’s involvement in Ukraine and again condemned such moves.

“Some people are wanting the World Cup to be taken away from Russia, but we give one answer to this â€“ we are involved in football and we will not allow politics to get in the way.”

Putin said the World Cup was as important as hosting last year’s Winter Olympics in Sochi and an equally “major task”.

“I don’t know how our team will perform at the World Cup, it’s the responsibility of the football specialists.

“But the preparations for the event is the responsibility of the state authorities.

“And we will do our best to disappoint neither you, Mr President, nor football lovers around the world,” the Russian leader said.