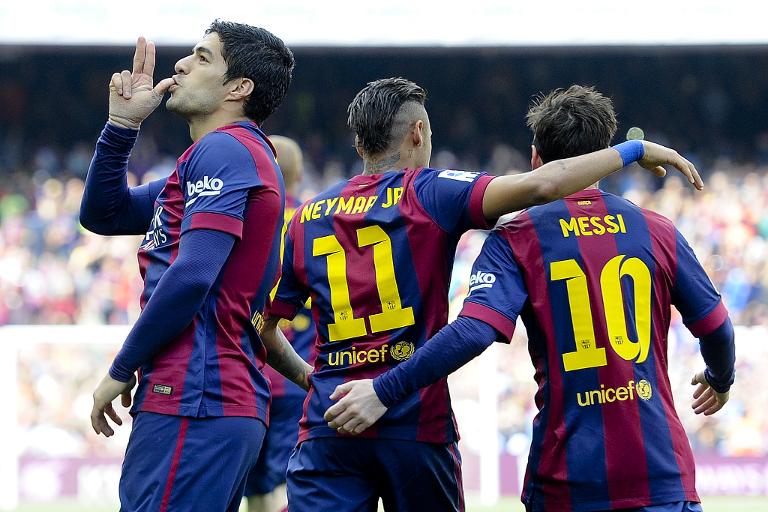 Barcelona defender Dani Alves has warned his side against complacency when they host a Paris Saint-Germain side bolstered by the return of key personnel through suspension to the Camp Nou on Tuesday.

Two goals from Luis Suarez took Barca to the brink of a seventh Champions League semi-final in eight seasons as they romped to a 3-1 win in the first-leg of the quarter-final tie in Paris last week.

However, a late own goal from Jeremy Mathieu offered the French champions a glimmer of hope as they welcome back top-scorer Zlatan Ibrahimovic and midfield maestro Marco Verratti.

“We will not speculate with the result because we don’t know how to,” Alves, who has been linked with a move to PSG come the end of the season, told Barca’s website.

“The philosophy and the spirit of the team is to challenge for every ball as if it was the last.

“We cannot think about our advantage, but just control the game and look to score from the first minute. That is the only way to overcome PSG.”

Barca remained on course for a treble of La Liga, Copa del Rey and Champions League with a hard-fought 2-0 win over Valencia on Saturday thanks to goals in the first and last minute from Suarez and Lionel Messi, who registered his 400th goal for the club.

And Luis Enrique’s men will also have key players back available as Alves returns after he too missed the first-leg through suspension, whilst Andres Iniesta is expected to overcome the back bruising he suffered at the Parc des Princes in time to feature.

It would take a remarkable turnaround for PSG to progress to the semi-finals for the first time since 1995 as Barca haven’t lost at home by more than one goal for nearly two years, when Bayern Munich rounded off a historic 7-0 aggregate thrashing of the Catalans with a 3-0 victory at the Camp Nou.

However, domestically things have been far easier for PSG in recent weeks as two goals from Javier Pastore kept them a point clear of Lyon at the top of the table in a 3-1 win at Nice.

David Luiz played the full 90 minutes despite his horror show when he was nutmegged twice by Suarez in the build-up to the Uruguayan’s goals and insisted that he is not feeling the after-effects of a hamstring problem that was originally expected to keep him out of both legs of the tie.

“I do not feel any pain , I just feel tired after that match,” said the Brazilian.

“In Barcelona we will do all we can. Of course we must still believe.”

However, teammate Blaise Matuidi admitted they will have to defend an awful lot better against Barca’s star front three of Messi, Suarez and Neymar to stand any chance.

“We must above all go without any complex and try everything to achieve what would be an amazing feat.

“We will be keen to show something different from the first-leg and primarily defend well because that’s what we missed at the Parc des Princes.”

PSG captain Thiago Silva has been included in the squad despite limping off with a thigh injury early on in the first leg, but Thiago Motta and Serge Aurier miss out through injury and suspension respectively.