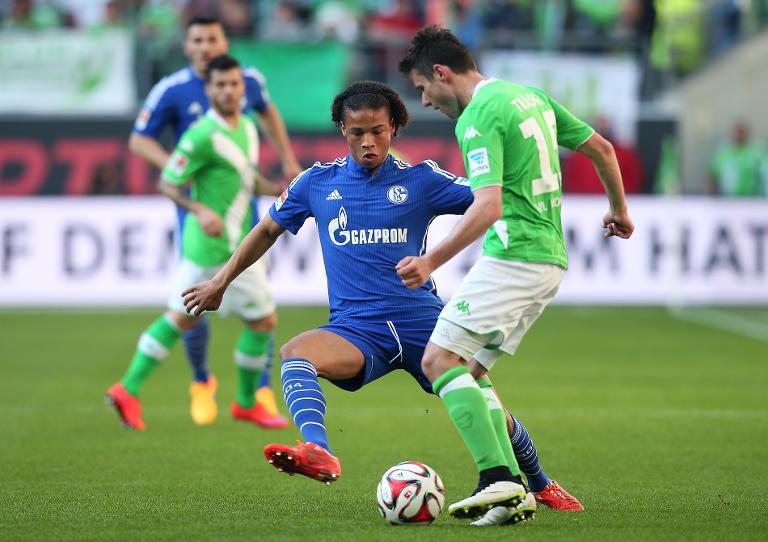 Pep Guardiola’s Bayern finished the weekend 12 points clear after their 2-0 win at Hoffenheim and with five games left they could have their title confirmed with a home win over Hertha Berlin on Saturday if other results go their way.

At Wolfsburg’s Volkswagen Arena, defender Ricardo Rodriguez hit the cross-bar early in the second-half from a free-kick in the hosts’ best clear chance.

But Schalke took a spectacular lead against the run of play as Germany under-19 left winger Leroy Sane won the ball on the edge of his own area, then sprinted away before beating two Wolves defenders to fire home on 53 minutes.

Having also earlier gone close with a free-kick, Belgium international De Bruyne rescued the hosts when he hit the bottom right-hand corner from 20 metres out to claim his 10th Bundesliga goal of the season on 78 minutes.

Wolfsburg could have snatched the three points at the death as France midfielder Joshua Guilavogui blasted a late volley over the bar.

Earlier, bottom side Hamburg suffered their fifth straight defeat and are heading towards an historic relegation from Germany’s top flight after their 1-0 defeat to Werder Bremen in the north German derby.

Bremen’s Argentine striker Franco di Santo claimed his 13th goal of the season by netting an 84th-minute penalty just after Hamburg’s Swiss midfielder Valon Behrami was sent off — on his 30th birthday — for pulling down Werder’s Zlatko Junuzovic.

Bremen are one of the league’s success stories this season having gone from last place in December to finish the weekend four points adrift of a Europa League spot.

In contrast, hapless Hamburg have just five games to close the four-point gap to safety as Bruno Labbadia suffered defeat in his first game since being appointed as Hamburg’s fourth coach this season on Wednesday.

“To lose a game with a penalty like that is bitterly disappointing,” said Labbadia, who is in his second stint as Hamburg boss.

“For me that was never, ever a red card.”

The only side to have never been relegated from Germany’s top flight, Hamburg only avoided the drop last season by winning a play-off.

Meanwhile, leaders Bayern sealed a hard-fought win at Hoffenheim, but have fresh injury worries for Tuesday’s crucial Champions League quarter-final, second-leg against Porto as they look to over-turn a 3-1 deficit.

Left-back Juan Bernat had to be helped off after a bone-crunching first-half tackle in Hoffenheim, but coach Pep Guardiola said the Spaniard was only taken off as a precaution.

“We didn’t want to take any risks,” he added.

Borussia Dortmund enjoyed a 3-0 victory at home to Paderborn to climb to ninth in their first game since coach Jurgen Klopp announced he would be leaving at the end of the season to be replaced by ex-Mainz boss Thomas Tuchel next season.

After Borussia Moenchengladbach’s goalless draw at Eintracht Frankfurt on Friday, Bayer Leverkusen took Gladbach’s place in third, and amongst the automatic Champions League berths, with a 4-0 mauling of Hanover 96.