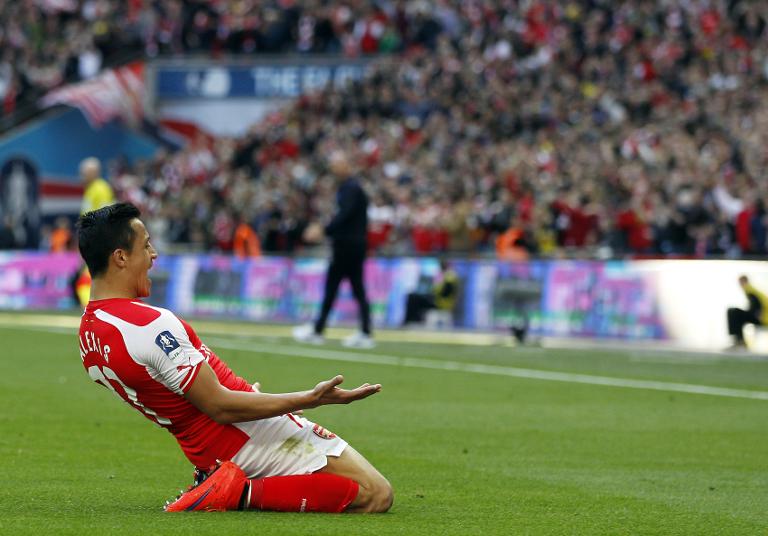 Arsene Wenger set his sights on a record-breaking FA Cup triumph after holders Arsenal rode their luck to return to the final with a 2-1 win over Reading.

Wenger’s club will contest a record 19th FA Cup final against Aston Villa or Liverpool thanks to a howler from Reading goalkeeper Adam Federici, who allowed Alexis Sanchez’s tame extra-time shot to squirm into the net to settle a tense semi-final at Wembley on Saturday.

Federici’s costly mistake allowed Arsenal to escape with a win they barely deserved from a performance that got progressively more disjointed after Garath McCleary’s second half strike cancelled out Sanchez’s 39th minute opener.

Regardless of the manner of their progress, the result took Arsenal ahead of Manchester United on 19 FA Cup final appearances and a victory when they return to Wembley in May would give the north Londoners the trophy for the 12th time, breaking the record they currently share with United.

With the Premier League title looking out of reach after Chelsea’s win against United on Saturday, lifting the Cup would maintain the feelgood factor at the end of another season in which Arsenal have glimpses of greatness and moments of fallibility.

“The records show you are consistent, that is the most difficult thing to do,” Wenger said.

“Overall any final is a 50-50, but if we can win and get the record that would be great.

“Lets hope we have all our players available when we come back here in the final. We have time to prepare, now lets focus on our next game.”

Wenger had no qualms about admitting Arsenal were well below their best at Wembley but, rather than berate his own players, he claimed Reading deserved immense credit for their tireless workrate.

“The spirit and concentration was there but what was missing was the speed and sharpness of our combinations in the last third,” he said.

“It was a difficult game against a very resilient and physical team. We controlled the game in the first half but in the second we struggled to come with the same intensity.

“Reading were ready to die on the pitch to go to the final and you have to congratulate them for their effort.”

Fortunately for Wenger, Sanchez was able to rise above the mediocrity of his team-mates just long enough to score the double that took his goal tally for the season to 21.

The former Barcelona forward has proved an inspired pre-season signing and Wenger said: “Sanchez has made a fantastic contribution this season. He struggled to get into the game at the start but he has that stubbornness and quality to do something.”

Wenger’s next challenge is to secure a first ever win over Jose Mourinho when leaders Chelsea come to the Emirates Stadium next Sunday.

The ankle injury suffered by German defender Per Mertesacker “doesn’t look good” and his absence would weaken Wenger’s resources against Chelsea, but he couldn’t resist the opportunity for a subtle swipe at his old rival Mourinho’s conservative tactics ahead of the London derby.

Asked for his reaction to Chelsea’s win against United, he said: “I ignored completely that result. They won 1-0? As usual.”

Reading manager Steve Clarke was left to rue a missed opportunity for a memorable upset, but he was delighted with the way his team, 19th in the second tier, took the fight to their more illustrious opponents.

“I know not many people outside our dressing room believed me but I really thought we’d win and the players gave a performance that backed that up,” he said.

Clarke also backed Federici to bounce back from the mistake that left the Australian goalkeeper in tears as he left the pitch.

“He is a strong character,” Clarke said. “He will take his disappointment on the chin, and when we play Birmingham on Wednesday I’m sure he will be as good as usual.”