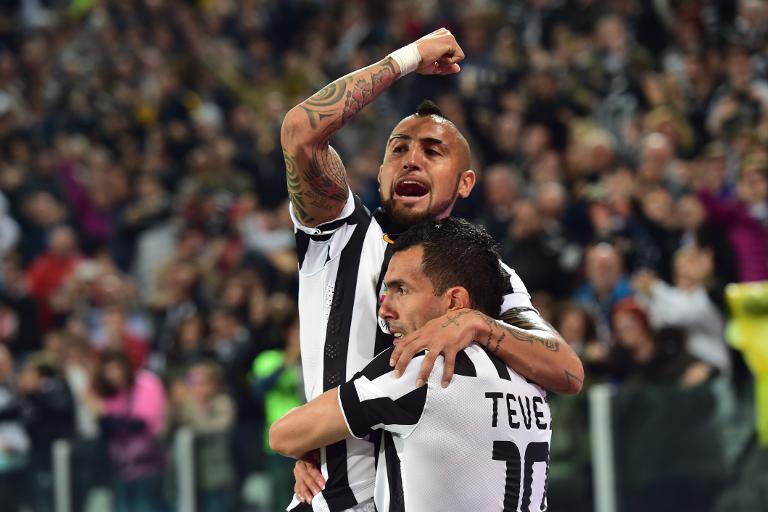 Carlos Tevez was again on target as Juventus put one hand on their fourth consecutive Serie A title with a commanding 2-0 win over closest challengers Lazio on Saturday.

Lazio travelled to Turin hoping to extend their impressive run of wins to nine games and keep city rivals Roma — their direct rivals for the league’s second automatic Champions League spot — at bay.

But Stefano Pioli’s visitors, who had conceded only two goals in their eight-game winning streak, never recovered from going 2-0 down by the half hour after Leonardo Bonucci’s strike added to Tevez’s 17th minute opener.

Having racked up 18 Serie A goals so far, Tevez leads French forward Jeremy Menez (AC Milan) and Argentinian striker Mauro Icardi (Inter Milan) by two goals in the race to see who ends the season as top scorer.

With seven games remaining, Juventus now hold a 15-point lead over Lazio, with Roma, in third a point further adrift but with a game in hand, looking to reclaim second spot with a win over Atalanta on Sunday.

“We have to win our next three games and then we can say the title is ours.”

Juve would nine more points to guarantee the title.

“Until it’s mathematically impossible for us to be caught, then we have to keep on pedalling,” said Bonucci.

“But tonight we showed how strong we are, especially in terms of mentality.”

Having conceded only nine times in 14 outings, Lazio had been the form team of 2015.

But their hopes of equalling a club record of nine consecutive wins, set under former coach Sven Goran Eriksson, unravelled in 11 first-half minutes.

“We approached the game well but we paid for our mistakes,” Pioli told Sky Sport.

“They were clinical on the two occasions when we had lost our concentration.”

Lazio paid a high price for a hasty clearance in the 17th minute, Andrea Pirlo heading the ball forward and Arturo Vidal rising above his marker to send it into the path of Tevez.

The Argentinian had already stolen a yard on the Lazio defence and powered down the left, holding off a late challenge by Dusan Basta to beat Federico Marchetti with a low angled strike.

But Lazio’s hopes of becoming the first victors at Juventus this season all but evaporated when Bonucci collected a short pass from Pirlo on the halfway line and ran all of 40 metres unchallenged before drilling a low shot past an outstretched Marchetti.

From then on, Lazio had little to offer despite Pioli trying to shake things up in the second half — at the tail end of which Danilo Cataldi was shown a straight red for a trip from behind on Tevez.

Juve were quickly back in command after half-time and it took a timely sliding tackle from defender Mauricio to dispossess Alessandro Matri as the Italian teed up to strike minutes after the restart.

And the Italian international won a free kick on the edge of the area when his attempted shot came off the arm of Chiellini, but although his drive surged over the defensive wall it was palmed over by an alert Gianluigi Buffon.