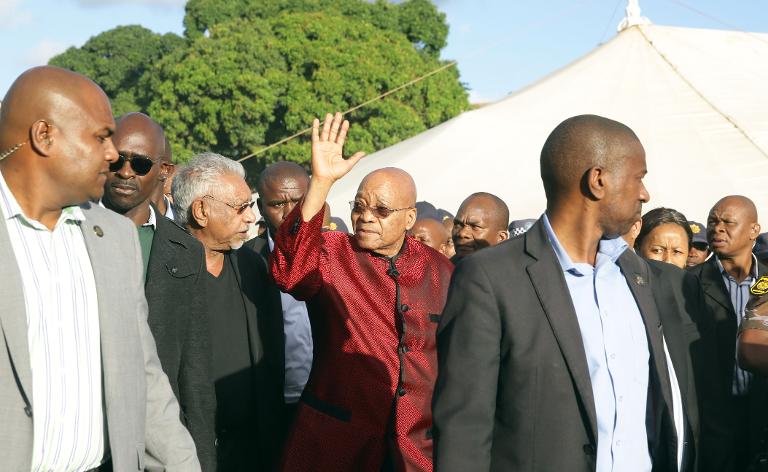 President Jacob Zuma pleaded with foreigners to stay in South Africa as he cancelled a state visit to Indonesia to deal with a wave of deadly xenophobic violence at home.

Three weeks of escalating anti-foreigner violence in South Africa have claimed at least six lives and forced more than 5,000 immigrants to seek refuge in makeshift camps.

The unrest, which began in the eastern port city of Durban before spreading to other parts of the country, carries echoes of the xenophobic riots that gripped South Africa in 2008 when 62 people were killed.

In the latest incident, police on Saturday said a foreigner died of stab wounds in Alexandra, a township north of Johannesburg. The impoverished area was the focus of much of the day’s violence, with officers firing rubber bullets to disperse looters.

More than 30 arrests were made overnight Saturday around Johannesburg alone.

Under pressure to avoid a repeat of the 2008 bloodshed, Zuma travelled to Durban to visit a camp for foreigners displaced by the violence, but he faced a hostile reception from the crowd, which yelled “go home, go home” and “too late, too late”.

“As government, we’re not saying to you ‘go away’. It is not every South African who is saying ‘go away’. It is a very small number of people who say so,” Zuma said at Chatsworth camp, where he presented a cheque of 50,000 rand ($4,100) to help the victims of xenophobic victims.

He vowed to end the unrest and sought to assure the crowd there was a place for foreigners in South Africa. “Even those who want to go home, they must know that when we have stopped the violence they are welcome to come back,” Zuma said.

The South African leader had been scheduled to fly to Indonesia on Saturday, but he announced he was scrapping the trip “to attend to matters at home relating to the attacks on foreign nationals.”

The decision came as alarm grew within South Africa — and from the United Nations and foreign capitals — over the attacks.

Neighbouring Zimbabwe, Malawi and Mozambique have announced plans to evacuate their citizens.

Reflecting international concern, the United Nations High Commissioner for Refugees said most victims targeted “are refugees and asylum seekers who were forced to leave their countries due to war and persecution.”

The violence has been largely blamed on a speech last month by King Goodwill Zwelithini, traditional leader of the Zulus, in which he blamed foreigners for South Africa’s high crime rate and said they must “take their bags and go”.

The king has since said his words were misinterpreted.

As the crisis raged, Zuma urged all churches to pray for peace and friendship on Sunday.

“We know that the majority of our people believe in human rights and peace and that they respect the dignity of all who live in our country,” he said in a statement late Saturday.

“They know that where there are concerns and differences, these should be resolved the South African way, through dialogue, and not through violence and intimidation.”

The violence has sparked angry responses in other African nations.

In Mozambique, a group of about 200 people on Friday blockaded the southern Lebombo border with South Africa, stoning South African vehicles.

In Zambia, a privately-owned radio station has stopped playing South African music in protest against the xenophobic attacks.

And in the Zimbabwean capital Harare, demonstrators marched to the South African embassy to condemn what they called the “senseless and gruesome slaughter” of fellow Africans.

South Africa already grappled with a wave of anti-foreigner violence earlier this year. In January, foreign shopkeepers in and around the vast township of Soweto, south of Johannesburg, were forced to flee and six were killed as looters rampaged through the area.