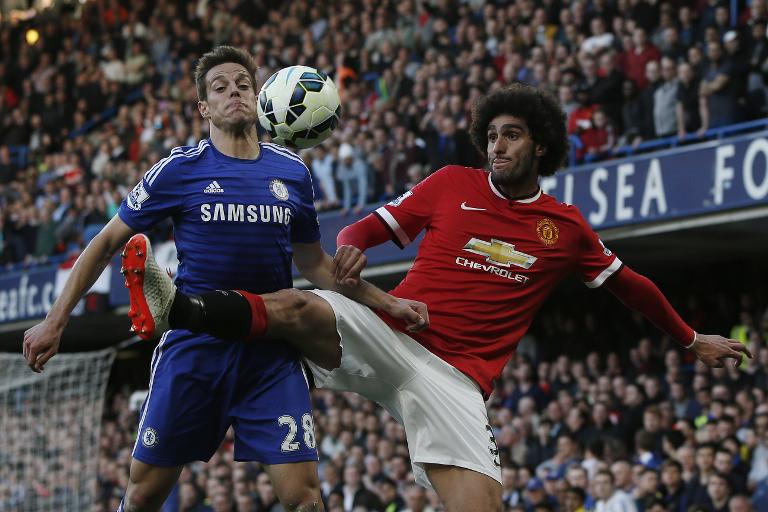 United were seeking a seventh consecutive league win, but despite bossing possession, it was Chelsea who prevailed after Hazard sped through to score his 13th goal of the campaign in the 38th minute at Stamford Bridge.

The Belgian’s strike left his side 10 points clear of second-place Arsenal, who welcome Jose Mourinho’s side to the Emirates Stadium next weekend, when another Chelsea win will bring a first title since 2010 within reach.

United’s recent surge had prompted talk of an improbable title tilt, but with Louis van Gaal’s men 11 points below Chelsea having played a game more, automatic Champions League qualification is now their only objective.

And while United’s football suggested there are better days ahead at Old Trafford, it is League Cup winners Chelsea, whose last seven wins have all been by a one-goal margin, who are on the brink of another coronation.

A calf injury to Michael Carrick obliged Wayne Rooney to drop into midfield for the visitors, but it was to the United captain that the first chance of the match fell on a warm, sunny afternoon in west London.

From Ashley Young’s pass, the over-lapping Luke Shaw cut the ball back for Rooney, but the United number 10 shot’s hit the stanchion to the left of the goal and bounced back into the net, fooling the travelling fans at the other end into thinking the deadlock had been broken.

United goalkeeper David de Gea had to toe the ball behind for a corner after Hazard’s pass sent Cesc Fabregas scampering into the box, but for most of the first half, the away team looked serene.

With Ander Herrera assuredly anchoring the midfield, Van Gaal’s men were finding passing triangles all over the pitch and they demonstrated their confidence when Paddy McNair advanced and saw a shot deflected wide.

An uninformed observer would perhaps have been forgiven for thinking it was United, and not Chelsea, who were on the verge of the title, but seven minutes before half-time, the hosts went in front.

A United move broke down when Radamel Falcao failed to control Chris Smalling’s pass and within seconds Chelsea were in, Oscar’s back-heel freeing Hazard to motor through and beat De Gea left-footed at the near post.

Falcao — making his first start since February 28 — got a sniff of goal in first-half stoppage time when Rooney’s stabbed pass was headed down by Marouane Fellaini, but Thibaut Courtois flew out to swat the ball off his toes.

Chelsea sat even deeper in the second half, but they came within inches of extending their lead after Herrera inadvertently drilled the ball straight to Nemanja Matic.

The Serbian’s pass freed Didier Drogba, whose shot was partially blocked by Smalling, sending it looping over De Gea, but Hazard, following in, could only jab the ball against the bar from a tight angle.

United continued to press, with Courtois saving from McNair and Rooney — at the second attempt — while Juan Mata and Falcao also went close.

Mourinho stiffened his midfield by introducing Ramires in place of Oscar and Van Gaal responded with a double change, sending on wingers Angel di Maria and Adnan Januzaj for the final 20 minutes.

While Hazard again worked De Gea, United procured another sight of goal with 13 minutes to go when Shaw’s pass released Falcao, only for the Colombian’s left-foot shot to strike the outside of the post.

There was another scare for Chelsea at the death when Herrera went over Gary Cahill’s outstretched leg in the penalty area, but to the relief of the hosts — and the disbelief of the visitors — referee Mike Dean adjudged it a dive.