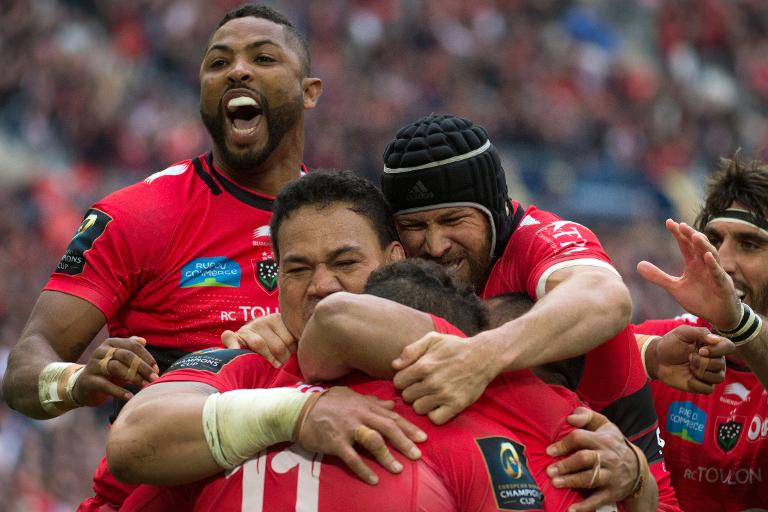 Toulon’s Welsh full-back Leigh Halfpenny kicked six penalties and converted a Bryan Habana interception try for a personal haul of 20 points in an ultimately thrilling match that went to extra-time after finishing 12-12 after regulation time.

Leinster had Ian Madigan to thank for five penalties, while Sean O’Brien scored a late try that made for a nerve-racking climax.

“The character of the boys was outstanding,” Halfpenny told Sky Sports.

“To close the game out and win it is a fantastic feeling.

Toulon’s Australian playmaker Matt Giteau said the French giants had “made it tough” for themselves.

“But in the big games you’ve just got to find a way to win and we did just that,” Giteau said.

Leinster No.8 Jamie Heaslip said his team had proved many pundits wrong.

“A lot of people didn’t give us a shout,” he said. “100 minutes of rugby, that rarely happens and we went right to the wire.

“You get punished for slight errors throughout the game… and we’ve come out second best today.”

Turnovers, ruck penalties and handling errors saw out a tight if uninspiring, pressure-laden first-half during which Toulon failed to convert their territorial domination into points.

Halfpenny missed a third penalty effort early in the second period, but was then on hand to snuffle out a Jimmy Gopperth charge-down in Toulon’s 22m area as Leinster pressed.

The Wales and British Lion full-back eventually pulled the scores level after 56 minutes with a penalty as blue skies replaced the rain of the first half.

It was then Madigan’s turn to miss a penalty, Toulon immediately into action as Guilhem Guirado charged down Madigan’s clearance kick, with only desperate defence stopping the red surge towards the whitewash.

Gopperth was penalised for not rolling away a minute later, Halfpenny kicking his fourth three-pointer to take the lead.

But Toulon’s Juan Fernandez Lobbe committed a stupid infringement in front of referee Wayne Barnes’s eagle eye, toe poking the ball out of a ruck. Madigan made no mistake from long range to draw the scores level again.

With two minutes to play, Gopperth sent a snap drop-goal just wide, and Rob Kearney sent one just short from the resulting 22 kickout in a nerve-racking finish.

Delon Armitage then had a chance to end the game with a 55-metre penalty, but his effort fell well short, meaning extra-time.

Two minutes in, the Toulon scrum destroyed their Irish counterpart and Halfpenny booted his fifth penalty to put the pressure on Leinster.

But once again, Madigan came straight back with one of his own after dangerous play by replacement lock Jocelino Suta.

Suta’s boilerhouse partner Ali Williams was then shown a yellow card for making contact with Devin Toner in the air.

But Toulon did not sit back despite being down to 14 men, Halfpenny nailing his sixth penalty as the irrepressible Chris Masoe tried to force a turnover.

And then Springbok winger Habana intercepted Madigan’s long looped pass and sprinted away for a try converted by Halfpenny.

But Leinster heads did not go down, Sean O’Brien being driven over for a try Gopperth failed to convert to make for a shaky end to the game.

On Saturday, Australian Brock James was the architect of Clermont’s 13-9 victory over Saracens in the first semi-final, sweet revenge for the 46-6 thumping the English club handed the Top 14 side at the same stage of the competition last season.