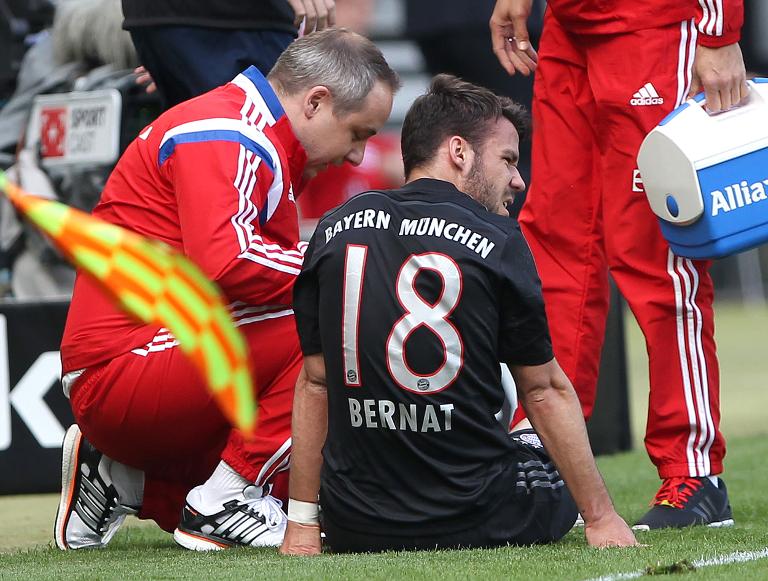 Bayern face a make-or-break Champions League quarter-final second leg against Porto in Munich having lost 3-1 in Portugal in the first leg last week, but they have eight players injured.

Bayern were already missing captain Philipp Lahm and his deputy Bastian Schweinsteiger with illness in Hoffenheim, while wingers Franck Ribery and Arjen Robben and defenders Medhi Benatia and David Alaba are long-term casualties.

“Bastian is sick, but he could play (against Porto), Philipp probably won’t but we have to wait to see how things go,” said coach Pep Guardiola.

Left-back Juan Bernat had to be helped off in the first half in Hoffenheim, but Guardiola said the Spaniard was only taken off as a precaution: “We didn’t want to take any risks”.

Depending on results elsewhere, next Saturday’s clash at home to Hertha Berlin could see Bayern confirmed champions after Sebastian Rode’s first-half strike and an own-goal from Hoffenheim captain Andreas Beck gave them three more points.

“We played really well in the first half and controlled the game,” added Guardiola.

“It will obviously be difficult (against Porto), but it’s our main goal. I have faith in the players.”

With second-placed Wolfsburg at home to Schalke on Sunday, Bayern extended their lead to 13 points with five games left.

Guardiola named a weakened side with 18-year-old Gianluca Gaudino and Mitchell Weiser, who turns 21 on Tuesday, included either side of Rode in midfield.

Bayern took the lead in Sinsheim when Rode fired past a posse of defenders from the edge of the area on 38 minutes and the hosts’ misery was completed when Beck turned Thomas Mueller’s cross into his own net deep in injury time.

Meanwhile, Borussia Dortmund enjoyed a 3-0 victory at home to relegation-threatened Paderborn to climb to eighth in their first game since coach Jurgen Klopp announced he would be leaving at the end of the season.

Having won the 2011 and 2012 titles, then finished runners-up to Bayern for the last two years, Klopp will quit Dortmund at the end of seven years in charge — ex-Mainz boss Thomas Tuchel is tipped to take over.

“We deserved to win and I’m pleased with the way we played,” said Klopp.

“It will get emotional towards the end of the season, but it’s all about football at the moment and everything else must be ignored.”

After Borussia Moenchengladbach’s goalless draw at Eintracht Frankfurt on Friday, Bayer Leverkusen took Gladbach’s place in third, and amongst the automatic Champions League berths, with a 4-0 mauling of Hanover 96.

Centre-backs Omer Toprak and Kyriakos Papadopoulos, plus forwards Julian Brandt and Stefan Kiessling scored to put Leverkusen level with Gladbach on 54 points, but ahead on goal difference.

Ausgburg went up to fifth and remain on course for a Europa League with a 2-1 home win over second-from-bottom VfB Stuttgart, thanks to goals by Tobias Werner and Paraguay striker Raul Bobadilla.

Stuttgart’s first-half consolation was scored by 24-year-old striker Daniel Ginczek, who has scored his fifth goal in four games.

Mainz are 11th after Japan striker Shinji Okazaki scored twice in their 3-2 win at relegation contenders Freiburg on Saturday.

Mid-table Hertha Berlin and Cologne both stay seven points above the relegation places following their goalless draw in the capital.