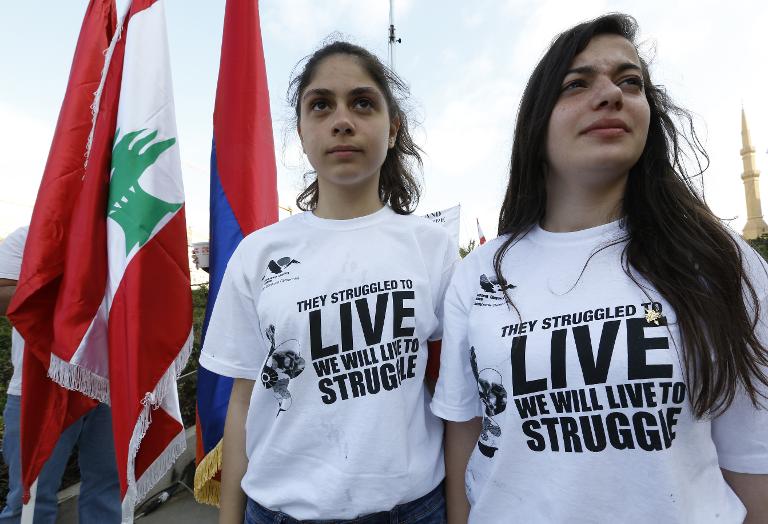 Armenians prepare to commemorate a hundred years since 1.5 million of their kin were massacred by Ottoman forces, as a fierce dispute still rages with Turkey over Ankara’s refusal to recognise the mass murder as genocide.

Hundred of thousands are expected to flock to a towering memorial in Armenia’s capital Yerevan on Friday for an emotional ceremony to mark the centenary of the start of a tragedy that still stirs deep divisions.

Ex-Soviet Armenia and the huge Armenian diaspora worldwide have battled for decades to get the World War I massacres at the hands of the Ottoman forces between 1915 and 1917 recognised as a targeted genocide.

But for modern Turkey — the successor to the Ottoman empire — hundreds of thousands died on both sides as Ottoman forces battled Tsarist Russia and describing the events as a “genocide” is a red line it cannot cross.

Armenian President Serzh Sarkisian has said the centenary will be used to remind the world of the struggle to recognise the massacre as genocide.

“This is an important date for the Armenian people and international community not only to look back and think over historical facts but to say ‘never again’,” Sarkisian said in a recent speech.

But the spotty guest list for the event highlights the lack of international consensus on the issue.

The presidents of Russia and France — two of less than two dozen countries to formally recognise the genocide — are expected to be among a handful of world leaders to join the crowds at the memorial, but others are shying away for fear of upsetting Ankara.

Meanwhile, Turkey has sparked ire by scheduling a major event for the 100th anniversary of the Battle of Gallipoli, usually marked on April 25, for the same day, in what Armenia says is an effort to steal attention from what they call their genocide commemorations.

In Istanbul a small gathering will be held to mark the day now chosen to mark the start of the atrocity when a hundred years ago Armenian community leaders were rounded up in then Constantinople.

Around the globe Armenians in the large diaspora — dispersed far and wide by the slaughter that followed — are planning to hold their own memorials from Los Angeles to Lebanon.

A day ahead of the commemoration, Armenia’s influential orthodox Apostolic Church will hold a ceremony to officially canonise all the victims of the killings.

In the run-up to the centenary, the potent tensions over the century-old killings were laid bare as Pope Francis this month sparked blistering condemnation from Turkey after he referred to the massacres as “genocide” at a Vatican mass.

“We recall the centenary of that tragic event, that immense and senseless slaughter whose cruelty your forebears had to endure,” Francis said.

“It is necessary, and indeed a duty, to honour their memory, for whenever memory fades, it means that evil allows wounds to fester.”

The European Parliament also urged Turkey to use the centenary of Ottoman-era massacres to “recognise the Armenian genocide” and help promote reconciliation between the two peoples.

Last year Turkish President Recep Tayyip Erdogan offered an expression of condolences to Armenians but this has not been followed by any further steps, with rhetoric sharpening even further.

In Turkey a Turkish-Armenian advisor to Prime Minister Ahmet Davutogou “retired”, days after he caused a furore within the ruling party by describing the mass killings as genocide.

For presidents in the United States — home to a large Armenian community — the issue has always been a particular thorny one.

Barack Obama — who pledged before he won the presidency to recognise the genocide — has sidestepped the contentious term by using the Armenian term Medz Yeghern, meaning great catastrophe.

The United States this month again called for a “full, frank” acknowledgement of the facts surrounding the mass murder of Armenians in World War I, but shied away from calling it “a genocide.”

As the international wrangling goes on with the centenary approaching, the remaining few who can just about remember the horror say hope is running out that the victims will get the recognition from Ankara.

“I always say to my children and grandchildren that it is very important for us — the living — to keep their memory alive,” said 105-year-old survivor Khosrov Frangyan, who was born under Ottoman rule in 1910 but now lives in Armenia.

“Their souls cannot rest in peace until the Turks accept what they did, ask for forgiveness and answer for their crimes. But I don’t believe that is possible.”