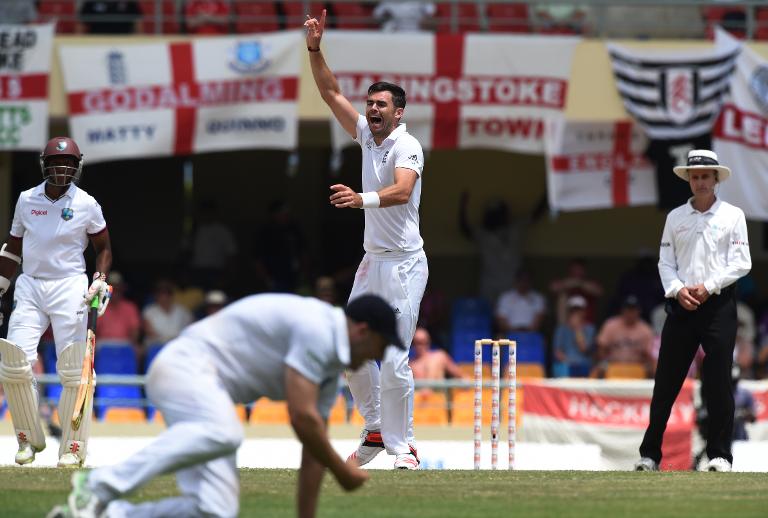 James Anderson became Englandâ€™s leading wicket-taker in Test history but celebration of the historic milestone could not be complemented by a team triumph as the West Indies hung on for a draw on the final day of the first Test at the Sir Vivian Richards Stadium in Antigua on Wednesday.

Jason Holder played the innings of his young cricketing life to take the home side to safety with three wickets in hand at 350 for seven after they were set the improbable target of 438. His maiden Test hundred of 103 not out, which spanned almost four hours during which he faced 149 deliveries and struck 15 fours, rescued the Caribbean team from what appeared to be a hopeless position when they slipped to 189 for six early in the afternoon session.

It was at that point, after first innings centurion Jermaine Blackwood added to the litany of dismissals via irresponsible shots from the top-order, that Holder came to the crease. His calm, controlled batting was the perfect foil to Denesh Ramdinâ€™s growing defiance, the pair putting on 105 runs for the seventh wicket when Anderson broke the record and gave his team one last chance to push for victory heading into the final hour of the match.

â€œIt was just a matter of staying out there and basically having a knock,â€ said Holder, who was chosen as man of the match.

â€œThe word weâ€™ve been using as motivation in our dressing room is â€˜belief.â€™ That belief made us all feel that the match could be saved, even with the bad start we had at the end of the day.â€

Having drawn level with the record tally of 383 wickets by former all-rounder Sir Ian Botham when he dismissed Marlon Samuels in the morning, Anderson returned with the second new ball and finally separated Ramdin and Holder, inducing an indeterminate defensive prod from Ramdin to have the West Indies captain caught for 57 by his England counterpart, Alastair Cook, at first slip.

Anderson greeted the historic moment with a combination of celebration and relief at claiming the coveted record in his 100th Test, although Englandâ€™s focus reverted swiftly to getting back to the business of claiming the last three wickets.

â€œMy immediate emotion was that we had gotten back into a winning position by opening up one end,â€ was the record-breaking bowlerâ€™s immediate reflection on the moment after play. â€œWe tried our hearts out but there just wasnâ€™t anything in that pitch to give us any assistance today.â€

It ultimately proved unsuccessful as tailender Kemar Roach solidly defended everything hurled at him to end unbeaten on 15 off 75 deliveries. He survived one scare when given out caught behind down the leg-side off Anderson only for umpire Billy Bowdenâ€™s decision to be reversed on referral by the batsman.

A swift afternoon capitulation appeared inevitable when the West Indies lost three important wickets in the morning, resuming at 98 for two.

Samuelsâ€™ dismissal for 23 after an hourâ€™s play followed the demise just a few minutes earlier of the other overnight batsman, Devon Smith. Having restrained himself admirably in more than three hours at the crease, the left-handed opener miscued a lofted on-drive at James Tredwell to be caught by Gary Ballance at mid-on for 65.

Tredwell, who bowled unchanged for an hour-and-a-half in the morning session, should have snared Samuels shortly after but the batsman, deceived completely by a cleverly flighted delivery, was mis-stumped by wicketkeeper Jos Buttler.

However Samuels did not make the most of the escape and when Shivnarine Chanderpaul was palpably leg beore wicket to Joe Root, who had replaced the persevering frontline off-spinner Tredwell, 15 minutes from the interval, the English celebrated the dismissal of one of their most resolute adversaries as if the match itself had been won.