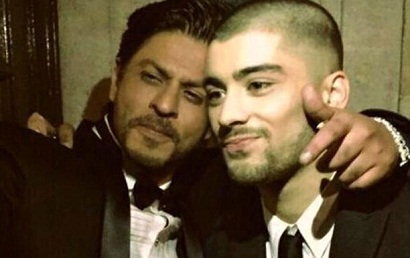 The actor flew to London to be a part of the awards ceremony and personally accept his award. But that is not the only commendable thing he bagged last evening. The Bollywood star also got himself a selfie or two, with former One Direction star, Zayn Malik.

The former One Direction heartthrob led the winnerâ€™s list by picking up the prize for Outstanding Contribution to Music at London’s Grosvenor House Hotel.

This marked the 22-year-oldâ€™s first public appearance since he quit the band, and Shah Rukh Khan was there to seize the opportunity and get a picture with him.Â

Soon after, the actor took to his Twitter handle to share the pictures with his fans and captioned it: â€˜Marvellous Asian Awards. Paul & Kiran hav done a great job. Zayn & Naughty Boy r so cool. Gurinderâ€™s BILB on WestEndâ€™.

It is believed that Zayn quit One Direction to lead a â€˜normal lifeâ€™. But days after the news broke; a solo track featuring the singer was uploaded online by Naughty Boy. Reports later confirmed that it was an old track.Â

Shah Rukh gave the young singer his blessings through a tweet that read, ‘This kid is so cool. May Allah bless him. Dinner time at the Asian Awards.’