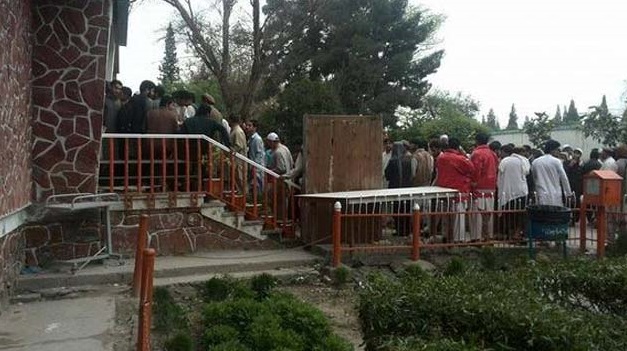 At Least 22 Killed and 50 injured in twin blasts in Afghanistan’s Jalalabad in a twin bomb blastÂ on SaturdayÂ morning.

Police officials said that they fear that the number of casualties could rise.

A suicide bomber detonated his suicide vest near the private Kabul Bank.

Reports suggest he detonated his vest in a line of people queuing up for salaries. Another blast took place near a shrine and municipality buildings.

Jalalabad is the capital of Afghanistan’s eastern Nangarhar Province, which borders Pakistan. It is the scene of frequent attacks. The latest attacks signal the Afghan Taliban’s resolve as the spring fighting season begins.

The Taliban has warned of attacks till foreign troops remain. US President Barack Obama has reversed an earlier plan to halve the number of US troops by the end of this year. They will remain at the level of 9,800 that they are at currently.