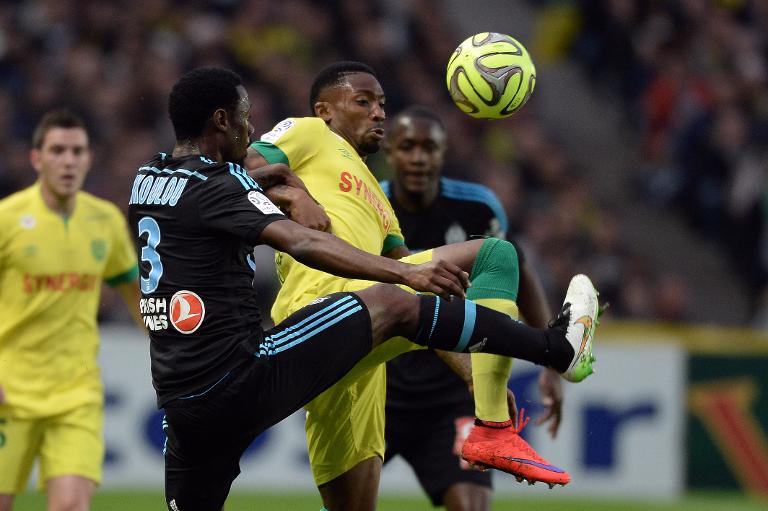 Marseille’s slump continued on Friday as Marcelo Bielsa’s side went down to a 1-0 defeat at Nantes that further damaged their hopes of qualifying for next season’s Champions League.

Serge Gakpe scored the only goal of the game in the 20th minute at a packed Stade de la Beaujoire following a defensive mix-up as Nantes claimed a win that moves them a step closer to securing top-flight survival.

But Marseille, after losing to Paris Saint-Germain and Bordeaux in the last fortnight, racked up a third consecutive defeat, their worst sequence of results in Ligue 1 since October 2013.

As a consequence, OM remain in fourth place, a point behind Monaco in the third and final qualifying berth for next season’s Champions League.

Indeed, they could end the weekend in fifth if Saint-Etienne win at leaders Lyon on Sunday evening.

“Things are going against us but we need to lift our heads now and turn things around,” defender Nicolas Nkoulou told beIN Sports.

“It is a delicate and difficult time but there are still games to play. We have to look forward now, that’s all.”

Bielsa claimed this week that his side remained the best team in the country, but from being top of the table at Christmas, Marseille have won just four times in 14 league games in 2015.

Against Nantes, they were without suspended playmaker Dimitri Payet so Michy Batshuayi started just behind Andre-Pierre Gignac, who was continuing his search for his 100th Ligue 1 goal.

However, Batshuayi missed one great chance in the first half, blazing over after Remy Riou had pushed out a low Brice Dja Djedje cross, while he also had a goal disallowed for offside.

By that time Nantes were already in front. A team that had scored just six times in 13 matches in 2015 clearly needed a hand when it came to putting the ball in the net and that is exactly what happened 20 minutes in.

There appeared to be little danger when OM goalkeeper Steve Mandanda played a square pass across his box to Rod Fanni.

However, Fanni caught his ‘keeper out by giving him a first-time pass back. Mandanda slipped and Gakpe was left with an easy finish.

Franck Ribery and Samir Nasri played the last time Marseille won in Nantes, in April 2006, and they were unable to find a way back into the game in the second half.

There was a late rally, but Andre Ayew was booked for diving in the box as the visitors appealed in vain for a penalty.

Then, in the third minute of stoppage time, Fanni thought he had made up for his earlier error when he headed towards goal, but Riou intervened with a superb save, tipping the ball onto the bar.

Lyon are two points clear at the top from Paris Saint-Germain, who go to Nice on Saturday licking their wounds after their 3-1 Champions League quarter-final first-leg defeat to Barcelona in midweek.

Monaco can strengthen their grip on third by beating Rennes on Saturday before they look to overturn a 1-0 first-leg deficit when they host Juventus in the second leg of their Champions League quarter-final next week.