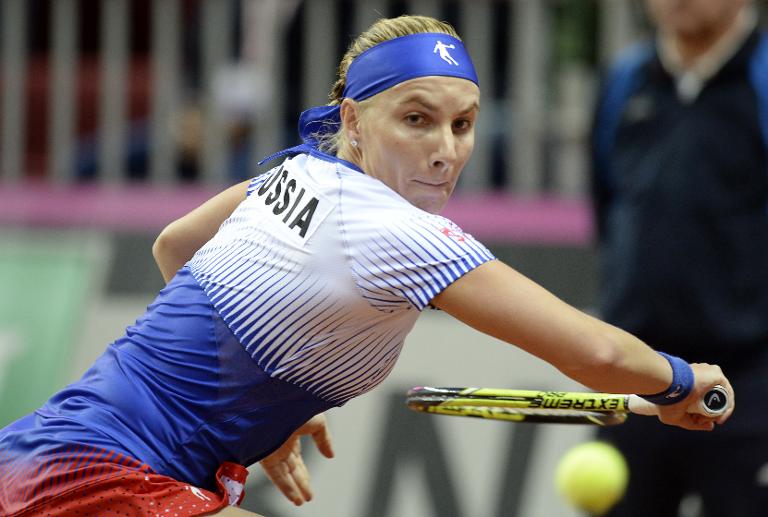 The 29-year-old Kuznetsova won 6-4, 6-4 her fifth head-to-head meeting with the world number 63 in one hour four minutes to improve her win-loss record to 4-1.

“It was a very nervous match as we both wanted to show our best tennis today,” Kuznetsova said.

“The key moment of the match was in the middle of the second set when Julia (Goerges) broke back to level.

“Luckily I managed to gather my strength to win the first point for my team.”

With this win Kuznetsova, currently 24th in the WTA rankings, became Russia’s most successful player in Fed Cup history with 27 wins so far.

The opponents both looked a bit nervous from the start on the red clay court of the Adler Arena producing a catalogue of unforced errors.

But Kuznetsova, who enjoyed vocal support from the local crowd, broke her opponent’s serve twice for a one-set lead in 42 minutes, while Goerges broke back on just one occasion.

Kuznetsova started the second set with an immediate break but Goerges, 26, who made 45 unforced errors in the match, broke back in the fourth game to level at 2-2.

But Russia’s two-time Grand Slam title winner produced the deciding break in the ninth game minutes before she won the set and the match on her first match point.

The next match between Russia’s Anastasia Pavlyuchenkova and Sabine Lisicki of Germany will feature the second singles’ rubber.

In Sunday’s reverse singles, Kuznetsova will first play against Lisicki and Pavlyuchenkova is then due to face Goerges.

In Sunday’s last rubber Elena Vesnina and Vera Zvonareva, a replacement for injured Maria Sharapova, will play Angelique Kerber and Andrea Petkovic in the doubles.