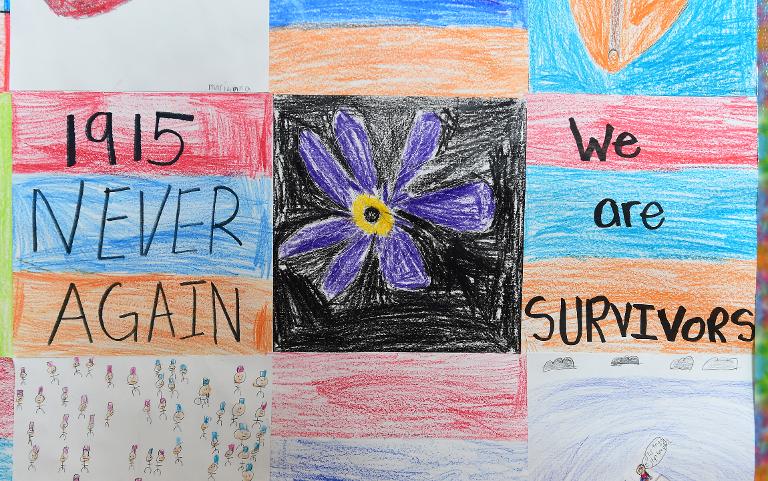 Edward Papikian, a high school student at the Rose and Alex Pilibos Armenian School in Los Angeles, says he thinks every day about his forefathers who were slain by Ottoman forces in 1915.

He says he and his classmates — who are preparing for the 100th anniversary of what Armenians say was a systematic campaign of ethnic slaughter — had been taught about it since childhood, “so that another genocide doesn’t happen.”

His classmate Nancy Bosnian added: “I hope everyone knows what happened. There were 1.5 million Armenians massacred.

“My great-grandparents were deported. We want Turkey to recognize this genocide, and ask for forgiveness,” Bosnian added.

On April 24, many of the 170,000 members of the Armenian diaspora in Los Angeles — one of the world’s largest — will rally to mark the start of what Armenians say was an effort by Ottoman forces to eradicating them from Anatolia, in what is now eastern Turkey.

Turkey however has long rejected the notion that any genocide took place , countering that hundreds of thousands of Muslims and Christians were killed in a shared wartime tragedy.

“The things our ancestors have experienced, we feel this pain in our own skin even though we were not here 100 years ago,” said Patil Derhovaginian, 34, a teacher at the school.

She will take her two-year-old daughter with her to the centennial remembrance event.

“She has this lavish life but she needs to understand once a year that this is important,” Derhovaginian said.

Vardanyan Tigran, 22, a dance teacher at a cultural center across from the school, was preparing for a performance that will be called “100 Years of Unhealed Wounds.”

“To me, there’s no better way to express the impact this massacre has had on me and my people than through dance,” he said.

Armenian identity is everything for students at the Pilobos school, even if they were born and raised in California.

“We are always with our families. When there is an Armenian somewhere, we know it,” said Bosnian, who is 15.

Silva Atsilatsyan, 25, who works at an insurance agency, said that when she is traveling, “I look for Armenian churches, I keep my ears open to see if I hear my language.”

All say they only speak Armenian at home.

He says his friends are all Armenian and he plans to marry an Armenian woman one day, but adds: “America is a safe place for everyone from everywhere to have a better life.”

Many of the students in Los Angeles say they have never met a Turkish person but believe that any lingering resentment between the two peoples should be handled on a political, not personal, level.

“My grandpa would tell me stories about Turks who helped him not be killed,” said one of the youths, John Yakhszyan.

Atsilatsyan, who works at the insurance company, said even her Turkish co-worker wishes the government would recognize the killings as genocide.

For her and many others in the diaspora, Armenia has become something of a promised land.

“I did a school trip. When we landed there, I saw the mountains and I started crying,” Atsilatsyan said.

She applauded reality TV star Kim Kardashian, who traveled to Armenia earlier this month with her rapper husband Kanye West and young daughter to celebrate her Armenian heritage.

Kardashian reportedly planned to work on a documentary film about the mass killings during the trip. She also met with the country’s prime minister.

Her Armenian ancestors on her father’s side emigrated to the United States from an area that now lies in Turkey.

“I think it’s the most important thing she’s done in her life. We needed a public figure,” said Atsilatsyan.