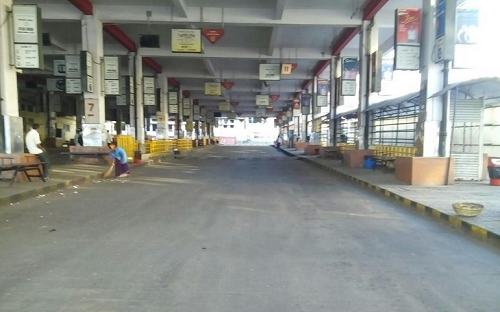 Bengaluru:Â Normal life in the countryâ€™s IT capital and several parts of Karnataka was crippled on Saturday as a 12-hour statewide bandh called by pro-Kannada outfits. The bandh was called to protest Tamil Naduâ€™s opposition to Mekedatu drinking water project across the river Cauvery.

Bus, auto and taxi services were badly hit in Bengaluru, causing hardship to commuters, leaving thousands stranded at many places.

Initial reports said the bandh had evoked a good response in Bengaluru, Mysuru, Tumkuru, Mandya and several other places, where activists of pro-Kannada organisations staged protests.

In Bengaluru, commercial establishments remained closed as also the shopping malls in support of the bandh, which the organisers have claimed has the backing of about 600 to 700 Kannada organisations.

Auto drivers and truck operators and owners of petrol bunks, hotels, restaurants and the film industry are backing the bandh.

The dawn-to-dusk bandh is a show of strength of the people of Karnataka against Tamil Nadu, Kannada Chaluvali Vatal Paksha President Vatal Nagaraj, whose Kannada outfit is spearheading the protest, said.

Buses bound for Tamil Nadu from Bengaluru also did not operate, as also those proceeding to other parts within the state, officials said.

Chief Minister Siddaramaiah has said the government is not supporting the bandh but the state is determined to go ahead with the Mekedatu project and appealed to people to maintain peace.

A protest march is being held later in the day from Town Hall in the city which will culminate at the Freedom Park after which a delegation will meet the Chief Minister and submit him a memorandum demanding that the project be taken up immediately.

Siddaramaiah in his budget speech, presented on March 13, has proposed preparing a detailed project report for construction of balancing reservoir on the upstream of Mekedatu across Cauvery river in Ramanagara district.

He had said Global Expression of Interest had been invited, and Rs 25 crore provided in the coming fiscal.

Farmersâ€™ bodies in Tamil Nadu had called for state band on March 28 over the issue to which several state political parties had expressed their support.

Tamil Nadu Assembly had also adopted a unanimous resolution urging Centre to rein in Karnataka from going ahead with its plan to build the dam across the inter-state river.

Police have beefed up security in the city, with the deployment of Karnataka State Reserve Police and City Armed Reserve, apart from the regular police personnel.

Bengaluru Police Commissioner M N Reddi said all precautionary measures had been taken and warned that no one will be allowed to violate law.