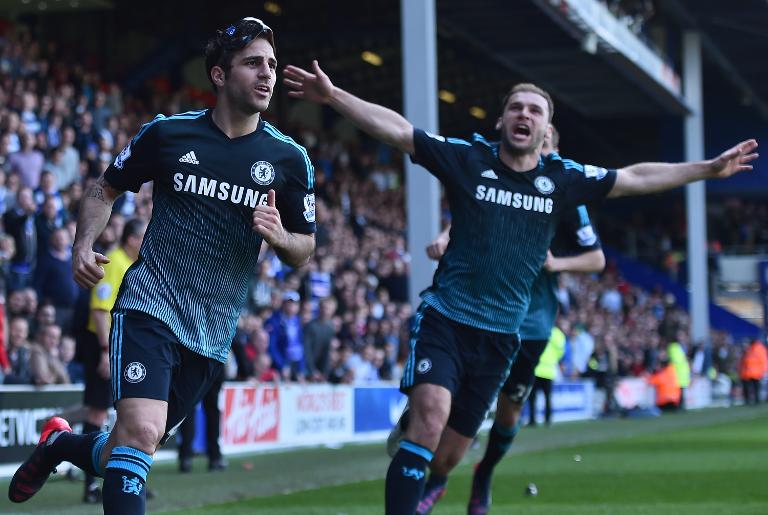 Chelsea will face an in-form Manchester United on Saturday as they try to move one step closer to the Premier League title at Stamford Bridge.

Jose Mourinho’s table-toppers are currently seven points in front of second-placed Arsenal, who are involved in FA Cup semi-final action against Reading at Wembley on Saturday.

Third-placed United are a point further back, having played a game more than Chelsea, but Louis van Gaal’s men will arrive in London on a run of six successive wins.

Chelsea need just 12 points from their seven remaining matches to win their first league title since 2010 and while a defeat on Saturday wouldn’t spell the end of their challenge, it would give the chasing pack a glimmer of hope.

The Blues’ form over the whole season was reflected on Thursday when the Chelsea pair of striker Diego Costa, currently the Premier League’s joint top-scorer on 19 goals with Tottenham Hotspur’s Harry Kane, and the gifted Eden Hazard were among the six nominees for England’s Professional Footballers’ Association Premier League Player of the Year award.

But that hasn’t stopped Chelsea proving unpopular with fans of other clubs, something Blues manager Mourinho attributes to their remorseless consistency.

“We are boring, top of the league since day one,” Mourinho said Friday.

“Everyone would love the Premier League to be like the (second-tier) Championship at this moment, with four teams separated by a couple of points,” he added.

“I know this would be the ideal scenario in the Premier League…We are trying not to allow that to happen.”

Meanwhile United, fresh from their 4-2 derby victory, have suffered an injury crisis ahead of their trip to west London.

They will be without influential midfielder Michael Carrick (calf) plus key defenders Marcos Rojo (stomach), Phil Jones and Daley Blind (both ankle).

United’s injury problems mean manager Louis van Gaal may have to deploy striker Wayne Rooney in midfield, having used the club captain there earlier in the season.

“It is the worst possible scenario,” van Gaal said Friday. “So I have to change my line-up a lot against Chelsea.

“Blind and Carrick play in the holding position in midfield, I don’t have any other player, or Wayne Rooney can play in the position,” the Dutchman added

Their task won’t be made any easier by the absence due to a groin injury of captain Vincent Kompany, with manager Manuel Pellegrini fearing the Belgium centre-back will miss the rest of the season.

“He has a muscle injury, we don’t know how many weeks,” said Pellegrini. “We don’t know if he will be fit from now until the end of the season.”

Sixth-placed Southampton will continue their quest for European football — and possibly even a place in the Champions League — away to Stoke on Saturday.

Meanwhile, basement club Leicester are only three points adrift from safety heading into their match at home to Swansea on Saturday.

The Foxes will kick-off buoyed by last week’s 3-2 win over West Bromwich Albion and manager Nigel Pearson said: “Our future is in our own hands and if we go into the last game with that we have given ourselves a realistic chance.”

Second-from-bottom Burnley travel to Everton on Saturday while Tottenham, looking to qualify for Europe, are away to struggling Newcastle on Sunday.

Liverpool and Aston Villa take a break from league action to play in the second of this weekend’s two FA Cup semi-finals at Wembley on Sunday.