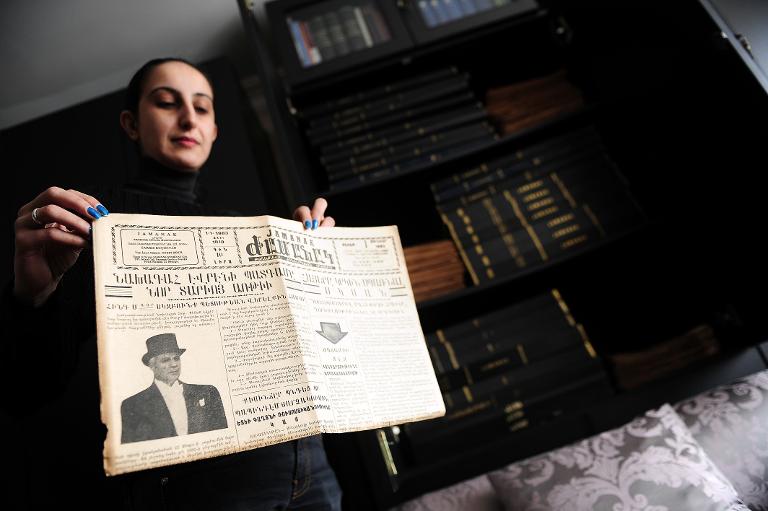 It’s witnessed the collapse of an empire, the horrendous massacre of its people and the birth of an entirely new state. And it keeps on printing.

The newspaper “Jamanak” (“The Times” in Armenian) is the oldest continuously-running newspaper in Turkey and oldest anywhere in the Armenian language.

It published its first issue on October 28, 1908, in the final one-and-a-half decades of the Ottoman Empire when Armenians were still citizens of the empire, before the creation of modern Turkey and when Istanbul was still officially known as Constantinople.

It survived the massacres from 1915 of Armenians at the hands of Ottoman forces, an atrocity whose 100th anniversary is commemorated on April 24.

And still it prints almost every day, keeping Istanbul’s small Armenian community of some 60,000 up to date with events and views.

Entering its offices in Istanbul’s Ferikoy district is like visiting a museum with the walls decorated with old photos and back issues painstakingly stacked up.

In his office, the director Ara Kocunyan, dictates his articles to three editorial assistants who type them into the computer in Armenian script.

“We are the newspaper of the Armenian community in Turkey,” said Kocunyan.

“Jamanak has been published without interruption and for a long time, it has crossed so many eras that it has become an anthology of the life of Armenians in the Republic of Turkey.”

Six days a week, the 2,000 daily copies of the newspaper are printed in a basement close to the editorial offices. As it always has.

The press is the domain of Ibrahim Celik, a man of mixed Kurdish and Armenian origin who takes his mission seriously even if he cannot speak or read the language of his grandmother.

“It is very important to print this newspaper so as not to lose this language. If this kind of newspaper was not printed then our children would forget Armenian and end up forgetting their origins.”

For all its history, the newspaper’s influence is in no way comparable to the Agos weekly, which publishes in both Turkish and Armenian and is also widely read outside the Armenian community.

The assassination in 2007 of the director of Agos, Hrant Dink, cerated a wave of revulsion across Turkey.

But Ara Kocunyan said that it would be wrong to underplay the importance of Jamanak.

“On the political level, it has no weight, that is evident,” he said.

“But we have an important mission to serve as the link between the Armenian community and the Turkish community and to prepare its future in this country.

He said the paper’s mission is even more essential in the run-up to the anniversary of the mass killings of Armenians by Ottoman forces, which Armenians regard as a targeted campaign of genocide that killed 1.5 million of their ancestors.

Turkey vehemently contests the use of the word genocide, saying hundreds of thousands of Turks and Armenians lost their lives in a shared wartime tragedy. Tensions have spiked ahead of the anniversary.

“On April 24, 1915, our newspaper was the only publication to talk about what happened,” said Kocunyan. Armenians see the start of the tragedy as the rounding up of Armenian leaders on April 24.

“People who like me were born in the 1970s did not grow up with the burden of this historical catastrophe.

“We, the young people, need to tackle this subject so that we can carry on living in this country.”

Kocunyan finds the attitudes of the Armenian diaspora — who lobby heavily in the United States to push for recognition of the killings as genocide — as somewhat radical.

In his commentaries, he urges a rapprochement between Turks and Armenians. “While protecting our history and culture, of course,” he added.

He said that the paper has never in recent years been singled out by the government because it is Armenian.

“We have a problem with freedom of the press in Turkey but it concerns all organs of the press. We don’t have more difficulties because we are Armenian,” he said.