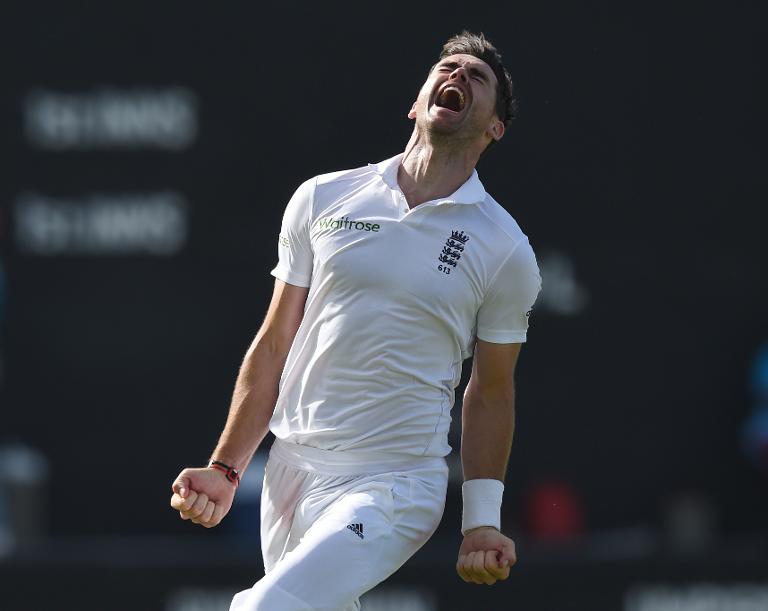 Having drawn level with the previous standard of 383 wickets set by flamboyant former all-rounder Sir Ian Botham earlier in the day when he dismissed Marlon Samuels, Anderson ended a period of growing frustration for himself and his team by having Ramdin caught by his England counterpart, Alastair Cook, at first slip.

That saw him reach 384 victims in what was already a celebratory 100th Test for the 32-year-old seam bowler.

But that was as good as it got for Anderson and England as the West Indies, thanks to Jason Holder’s unbeaten 103 — the 23-year-old all-rounder’s maiden first-class, as well as Test hundred, held out for a draw.

“My immediate emotion (when I took the record-breaking wicket) was we were back in the game. We were hoping to get the win,” Anderson told Sky Sports after the first match of a three-Test series ended all square.

“I’m hugely proud, great to have my family here as well and taking over from an English legend is a hugely proud moment for me.”

Botham initially tweeted his congratulations, saying: “Great moment for Jimmy and his family….. Congratulations you deserve it …. Awesome !!”

The all-round great, writing in his column for Britain’s Daily Mirror, added Anderson was the “complete bowler”.

“He has been a joy to watch for more than 12 years in an England shirt and I’m absolutely delighted for him that he has finally overtaken me to be No. 1 on the Test wicket takers list out on his own,” Botham wrote.

“Because he has been out on his own for years as the leader of England’s attack and the finest swing bowler of his generation.”

Botham added: “He hasn’t done it the easy way, he has had to work hard for his rewards and he has had to improve along the way to become the complete bowler he is today.

“You don’t take as many wickets as he has by being a one-trick pony who can only succeed in swinging or helpful conditions.”

Meanwhile Botham said there were more milestones to come for Anderson.

“And I’m glad I was here in Antigua to watch him do it.”

Anderson’s breakthrough was critical to England’s chances of completing victory as it ended a stubborn 105-run partnership for the seventh wicket and left the West Indies, who were set the improbable victory target of 438, at 294 for seven and needing to survive for more than an hour with only three wickets in hand.

Anderson, who made his Test debut against Zimbabwe at Lord’s in 2003, has been England’s bowling spearhead for the past six years following the departure of key pacers like Steve Harmison, Matthew Hoggard and all-rounder Andrew Flintoff from the international scene.

His 384 wickets have come at the respectable average of 29.77 and with England just embarking on a period of intense activity involving 17 Tests over nine months, Anderson will be expected to surge past the landmark of 400 wickets and eventually establish a national record that could be very hard to beat.

However, there are 13 bowlers above Anderson in the all-time list of Test wicket-takers, with Sri Lanka’s retired off-spin great Muttiah Muralitharan top of the pile on a tally of 800 wickets.