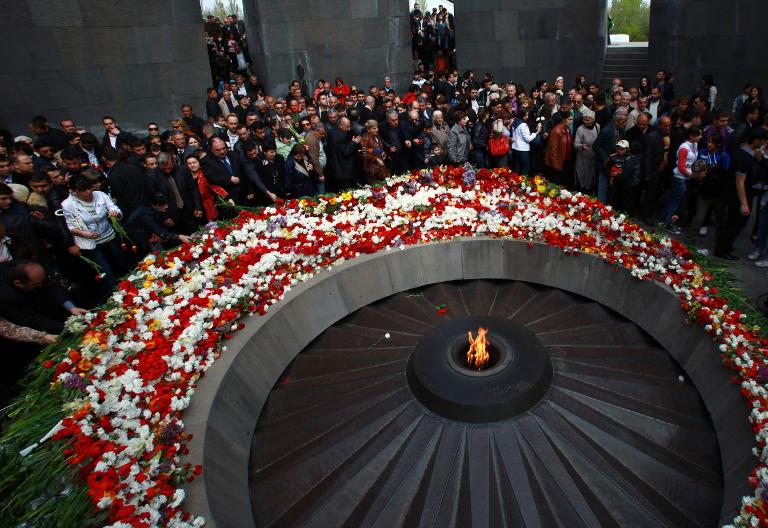 Mass killings? Mutual bloodletting? Genocide? The hundreds of thousands of dead have been silent for a century, but generations on, Armenians are still battling to get the World War I slaying of their ancestors recognised as a genocide.

As Armenians around the world gear up to mark 100 years since the start of the slaughter on April 24, the struggle to get the world — and above all Turkey — to use the term “genocide” remains deeply divisive.

To Armenians the word represents definitive proof of their ancestors’ horrific suffering at the hands of the Ottoman empire during World War I, but for Ankara the violence was perpetrated by all sides and describing the events as “genocide” is a red line it cannot cross.

Trapped somewhere in the middle is an international community, notably the United States, under pressure from Armenia’s large diaspora but worried about upsetting a rising Turkey.

“For Armenians the word ‘genocide’ encapsulates what happened to their forefathers in 1915 and also elevates the Armenian experience to the level of that of the Holocaust,” said Thomas De Waal, an expert on the region at the Carnegie Endowment for International Peace in Washington.

“Precisely for the same reason, official Turkey has always rejected the term, on the grounds that it equates the behaviour of their grandparents with the Nazis and also out of paranoia that the application of the word could lead to legal claims against Turkey.”

Armenians say up to 1.5 million of their kin were systematically killed between 1915 and 1917 by Ottoman authorities as their empire — the precursor to modern Turkey — crumbled.

Turkey rejects the claims, arguing that 300,000 to 500,000 Armenians and as many Turks died in civil strife when Armenians rose up against their Ottoman rulers and sided with invading Russian troops.

For some 30 years after the killings no one thought of calling the massacres of Armenians a genocide — because the term itself did not exist.

Up until then, Armenians referred to the tragedy simply as the “Great Catastrophe” — or Medz Yeghern in Armenian.

Coined only in 1944 by Polish-Jewish lawyer Raphael Lemkin, the word “genocide” became codified in law in the 1948 United Nations Genocide Convention, which defined it as “acts committed with intent to destroy, in whole or part, a national, ethnical, racial or religious group”.

The start of the clamour for recognition came later in 1965 as Armenians around the world marked the 50th anniversary of the killings.

In Armenia itself — then a republic of the Soviet Union — discussing any official acceptance of the genocide was a taboo but an unprecedented protest that saw some 100,000 take to the streets forced the Kremlin to start reevaluating its position.

“It was like a genie was let out of the bottle,” Rolan Manucharyan, a physics professor who took part in the 1965 demonstration in downtown Yerevan, told AFP.

The 1980s then saw an surge in the international movement for recognition, mainly fuelled by the Armenian community in the US, with outbursts of violence as radical groups killed Turkish officials.

So far, Armenia says 22 countries — prominently France, with its large Armenian community — have recognised the genocide.

Last Sunday Pope Francis became the latest international figure to wade into the controversy as he used the term “genocide” to describe the killings, sparking a furious reaction from Turkey.

For American presidents the issue has always been a thorny one.

Ronald Reagan used the term in the early 1980s but since then the commanders-in-chief in Washington have shied away.

Barack Obama — who pledged before he won the presidency to recognise the genocide — has sidestepped the contentious term by using the Armenian term Medz Yeghern.

The fallout from the massacres still shapes the region with official ties between Turkey and Armenia frozen.

Part of the fear in Ankara over the push for genocide recognition is that it could see Armenians lay claim to land in eastern Turkey.

“The term ‘genocide’ is not just an academic concept but also a legal one. It means that a crime was committed and suggests that there should be punishment and compensation,” said Ruben Safrastyan, the director of Yerevan’s Institute of Oriental Studies.

At present Armenia has no official territorial claims against Turkey but in 2013 prosecutor general Aghvan Hovsepyan sparked fury in Ankara by saying Armenians should have their “lost territories” returned.

But despite the dreams of some Armenians to reclaim their land, analysts said few outside the community seriously think there will be any move to retake the land.

“It would be very difficult for any Armenian political leader to say that Armenia has no territorial claims to Turkey,” Svante Cornell from the Washington-based Central Asia-Caucasus Institute told AFP.

“But Western politicians don’t take seriously” the possibility of a land dispute.

As the 100th anniversary of the killings approaches, the struggle for official recognition is as intense as ever.

And the burden of what happened — and getting recognition for it — still weighs heavily over Armenia and Armenians around the world.

“The pain forces us to constantly look back into the past,” said Armenian author Ruben Hovsepyan, whose mother fled the killings as a child.

“It does not allow us to fully build our future as we use up so much national energy and potential on forcing Turkey to recognise the genocide.”