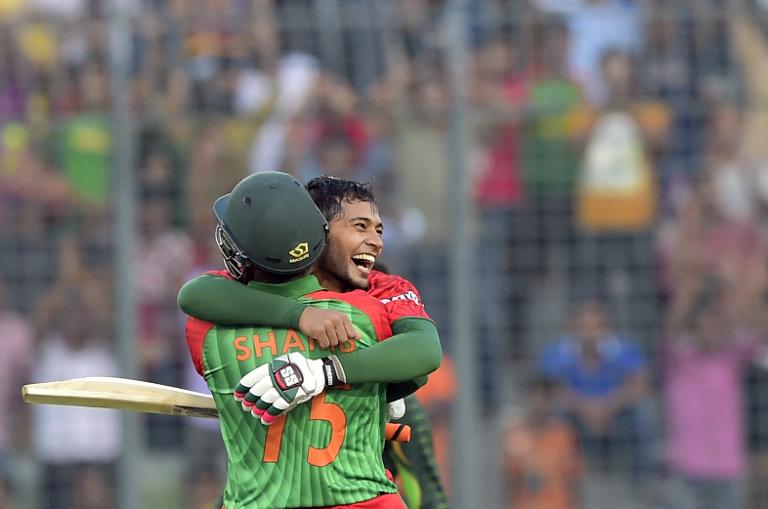 Tamim Iqbal and Mushfiqur Rahim posted impressive centuries as Bangladesh piled up their highest one-day score of 329 for six in the first of three internationals against Pakistan in Dhaka on Friday.

Left-handed opener Tamim hit 132 off 135 balls and Rahim smashed a 77-ball 106 to steer Bangladesh past their previous best total of 326 for three against the same rivals in 2014.

The pair added 178 runs for the third wicket, their country’s highest partnership for any wicket, improving upon the 175 by Habibul Bashar and Rajin Saleh against Kenya in 2006.

Tamim and Rahim ruined off-spinner Saeed Ajmal’s comeback to international cricket after an absence of eight months due to an illegal bowling action.

Ajmal conceded 74 runs in 10 wicketless overs with his remodelled action to finish with his worst one-day bowling figures.

Bangladesh, who won the toss and opted to bat first, scored only seven runs in Ajmal’s first four overs, before Tamim and Rahim lashed out at the spin spearhead.

Tamim hit 15 boundaries and three sixes in his fifth one-day century and Rahim smashed 13 fours and two sixes after being dropped by Junaid Khan when he was on 35.

The match marked the start of a new era for Pakistan cricket following the one-day retirement of skipper Misbah-ul Haq and senior all-rounder Shahid Afridi after the World Cup.

The second and third one-dayers will also be held at the same Sher-e-Bangla stadium in Dhaka on April 17 and 22.