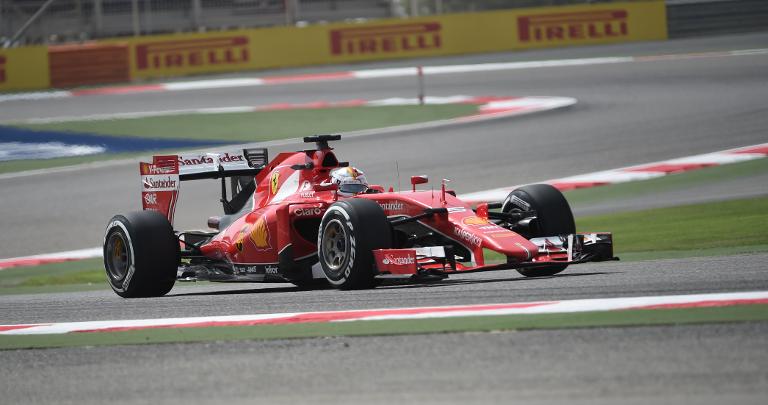 The two red cars took over at the head of the timings in the final seconds of a largely uneventful 90 minutes in hot conditions at the Sakhir circuit while champions Mercedes concentrated on their preparations without delivering fast laps.

Championship leader and defending driversâ€™ champion Lewis Hamilton was down in 16th place, one behind his Mercedes team-mate Nico Rosberg, who is hunting a third pole in Bahrain and a much-needed first win this year.

In air temperatures of more than 32 degrees and with a track temperature of more than 50, the most notable moments came when Jenson Button spun off in his McLaren with an electrical problem and Venezuelan Pastor Maldonado, twice, left the circuit in his Lotus.

Maldonadoâ€™s team-mate Romain Grosjean sat out the session to give the team’s test and reserve driver Briton Jolyon Palmer a run in his car. Palmer wound up 14th, two places behind the Latin American.

At the front, Finn Raikkonen clocked a best lap of one minute and 37.827 seconds to outpace four-time world champion Vettel by two-tenths of a second.

Ferrariâ€™s late effort pushed another Finn Valtteri Bottas of Williams down to third ahead of Carlos Sainz Junior of Toro Rosso, Daniel Ricciardo of Red Bull and Dutch teenager Max Verstappen, who followed up his points-scoring impact in China with sixth place in the second Toro Rosso car.

Two-time champion Fernando Alonso was seventh in the second McLaren, a position that may signal an improvement for the British team or, more probably, the lack of significance anyone should attach to the first session in the run-up to the seasonâ€™s first night race on Sunday.

That means, for all the teams, much cooler conditions than those in the heat of the day and, therefore, not the same opportunity for Ferrari to seize their opportunity to demonstrate their better tyre-wear performance than Mercedes in the hotter conditions.

“It is a night race,” said Vettel. “It is maybe not as hot as the conditions we had in Malaysia. The last races have been good for us and we have proved the car is working in cold and hot conditions.

“Hopefully we can continue that trend by looking after the tyres and put some pressure on the teams in frontâ€¦.There’s only one team in front, of course!.”