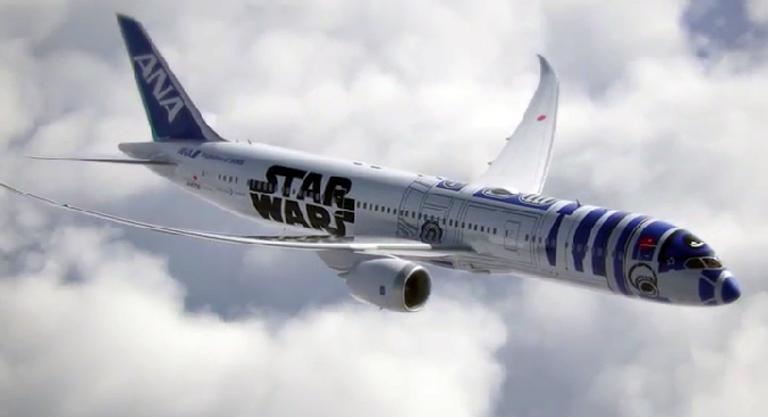 It might not be the droid you’re looking for, but a plane painted to look like R2-D2 could be the next best thing for “Star Wars” fans awaiting the franchise’s reboot.

Japan’s All Nippon Airways (ANA) has unveiled a Boeing 787 Dreamliner decorated to look like the small round robot that appears in every episode with his multi-lingual sidekick C-3PO.

The cockpit and front half of the white fuselage are painted with blue panels in the shape of those on the little droid who does everything from carrying secret plans for the Death Star to co-piloting Luke Skywalker’s X-Wing.

The legend “Star Wars”, in the movie’s distinctive font, adorns the body of the plane behind the wing, while the tail is in ANA’s normal — also blue — livery.

News of the aircraft, which ANA says will ply an international route in the autumn, comes as fans got their first look at a new teaser trailer for “Star Wars: The Force Awakens”, the seventh installment of one of the most successful movie series of all time.

The action-packed clip showcases aerial dogfights featuring the X-Wings of the Rebel Alliance and the Tie Fighters of the Galactic Empire.

It also offers a glimpse of mercenary pilot Han Solo and his hairy companion Chewbacca, much-loved characters of the original movie, along with their Millennium Falcon ship.

The film is due for release in December.