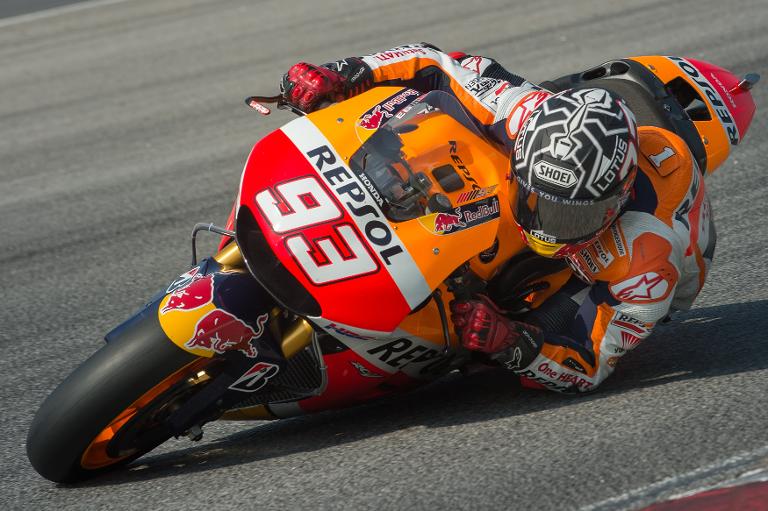 World champion Marc Marquez arrives in Argentina for Sunday’s third leg of the MotoGP championship with a spring in his step after dominating last weekend’s Grand Prix of the Americas.

The Honda star, who reeled off wins in the first ten races last year, was back in business in the Texas state capital Austin after a sluggish season-opening fifth in Qatar.

The 22-year-old is lying third in the standings, with 36 points, five behind nine-time champion Valentino Rossi, who came fourth last weekend to add to his victory at Losail.

Marquez, though, will be the man to beat again on Sunday at the Termas de Rio Honda circuit where he swept all before him last year on Argentina’s return to the MotoGP calendar for the first time in 15 years.

“In Qatar I didnâ€™t get the result I would have liked, but we werenâ€™t too worried, because the feeling in general was positive,” he wrote in a blog for his team.

“After a good weekend in Austin, I am feeling relaxed and confident again.

“Weâ€™ve already seen that the Ducatis are putting up a good fight, that Rossi is very fast, and I donâ€™t doubt that (Jorge) Lorenzo will also move on up and fight for wins. So we have to concentrate 100%.”

Reflecting on last weekend he singled out his remarkable pole, posted on his spare bike with only minutes left in qualifying.

“It was a moment of pure adrenaline, thereâ€™s no other way to describe it,” he wrote.

“When I stopped the bike I looked at the time remaining and tried to mentally calculate it as quick as possible. I saw that I had time to try it, not much, but it was there. Thatâ€™s why I didnâ€™t want to lose a single second and I ran for the second bike.

“I canâ€™t deny that was the best moment of the entire weekend, even better than the race itself.”

Dovizioso is waiting to exploit any weakness on the part of the double world champion at a track where he trailed in only ninth 12 months ago.

“Last year I had a difficult race in Argentina, because we had a few technical problems,” the Italian said.

“I didnâ€™t have a good feeling with the bike and the track was very dirty, so the whole weekend didnâ€™t go well.

“Now the situation is different, and I am sure that at Termas we can fight for the leading positions, like we did in the first two races of this year.â€

At 36, Rossi is no spring chicken in MotoGP terms but the charismatic London-based Italian is rolling back the years at Yamaha after a frustrating spell at Ducati.

He said: “Iâ€˜m happy to go to Argentina because I like the track.

“We hope that there will be a better condition of the tarmac compared to last year, because the track and the layout are good. It’s also not a bad circuit for our YZR-M1.”

Rossi’s teammate, former champion Jorge Lorenzo, shrugged off a bout of bronchitis to take fourth in Texas and is fully recovered as he tries to improve on last year’s third in Argentina.

“I hope Argentina will suit us better,” said the Spaniard.

“In Termas the circuit is pretty nice to ride and last year, even if I wasnâ€˜t in an optimal shape, I still managed to get on the podium. Itâ€˜s a fast track with very nice corners and I guess this is good news for our bike.â€