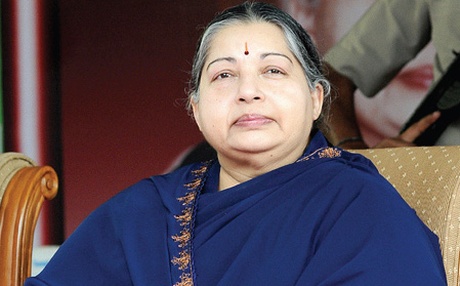 New Delhi: The Supreme Court on Friday extended former Tamil Nadu Chief Minister J. Jayalalithaa’s out on bail period till May 12, 2015 in connection with the disproportionateÂ assets case.

The apex court had earlier last week referred a plea seeking removal of a special public prosecutor in the case, after a division bench gave differing opinions.

Jayalalithaa, who is currently out on bail till April 18, was sentenced to four years in jail on September 17 last year in a high-profile corruption case that has lasted nearly two decades.

A special court in Karnataka found Jayalalithaa guilty of “disproportionately” amassing about 530 million rupees outside her known sources of income.

Jayalalithaa was legally obliged to step down as the chief minister of Tamil Nadu, which she had governed since 2011 under her latest term.

Following the news of her arrest, Jayalalithaa’s supporters had clashed with the police and violence erupted in parts of Tamil Nadu.

Later, on October 17, 2014,Â JayalalithaaÂ was granted bail by the Supreme Court on grounds of poor health. The apex court extended her bail in December 2014 by another four months.Â