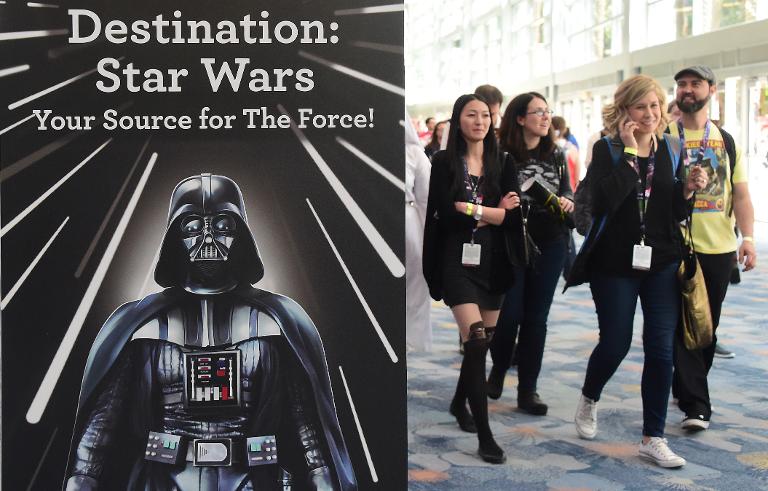 Hype surrounding the eagerly anticipated “Star Wars” reboot made the jump to light speed as the movie’s makers unveiled a new trailer that delighted fans with a glimpse of iconic characters Han Solo and Chewbacca.

The action-packed second trailer for “Star Wars: The Force Awakens” showed spacecraft dogfights and a chase involving the Millennium Falcon before concluding with the unmistakable voice of Harrison Ford as Solo.

“Chewie, we’re home,” Solo says to his Wookiee friend, who offers a signature roar in reply before the trailer closes with a shot of the famous yellow-on-black “Star Wars” logo.

The teaser was premiered at the opening of the four-day Star Wars Celebration convention in Anaheim, outside Los Angeles, sending around 40,000 fans who had flocked to the event — many wielding light sabers and wearing full “Star Wars” costumes — into raptures.

The hashtag #Chewiewerehome was rapidly adopted by fans on Twitter while #StarWars was soon a top trending subject on the social media site as anticipation for the movie, due out on December 18, went into overdrive.

Many fans spoke about tears of joy after the trailer’s soaring finale featuring Han Solo and Chewbacca, central characters of the beloved first trilogy of “Star Wars” films made by George Lucas between 1977 and 1983.

“I’m 41 years old and I cried at the end!” tweeted one fan, sentiments echoed by many after the trailer’s release.

“The Star Wars trailer literally had me in tears and cheering,” US sitcom actor Lucas Neff added on Twitter.

In another scene, played out against the familiar soundtrack used in the first films, Solo’s spaceship the Millennium Falcon is seen being chased inside the cavernous exhaust pipe of a stricken Imperial Star Destroyer.

The trailer also featured a voiceover by actor Mark Hamill, who returns as Luke Skywalker.

“Star Wars” has attracted generations of loyal fans ever since the first film arrived nearly 40 years ago, creating a signature moment in the history of popular culture and launching one of the biggest movie franchises ever.

After a second trilogy of prequel films wrapped in 2005, the movie franchise had lain dormant until Disney shelled out $4 billion to buy creator Lucas’s Lucasfilm in October 2012.

Disney soon announced plans for three new films in the series, with acclaimed Hollywood director J.J. Abrams being entrusted with the reboot.

Filming began in Britain in May last year on “The Force Awakens,” or Episode VII.

Abrams told a panel discussion that the new film would seek to recreate the realism of the original films by placing less emphasis on computer-generated special effects.

“We needed a standard that felt real. You want it to be legitimate, authentic. So building as much (of the sets) as we could was the mandate,” said Abrams of the production, which was partly filmed on location in Abu Dhabi.

“Star Wars is as much a Western as a fairytale and one of the things that you want and expect to see are beautiful John Ford landscapes and shooting in Abu Dhabi provided just that,” he said.

The 48-year-old director, who has also successfully rebooted another science fiction franchise for the big screen with two “Star Trek” films, revealed he had initially been lukewarm when approached to oversee the return of “Star Wars.”

But eventually, he said, he decided “it was impossible to say no.”

Abrams admitted he was occasionally daunted by the pressure of delivering a film that would satisfy the expectations of millions of fans across the globe.

“But while there are moments of horror, the reality is I’ve never had more fun in my life working on anything and the opportunity far outweighs the risk,” he said.

“I can’t wait for you to see the movie.”