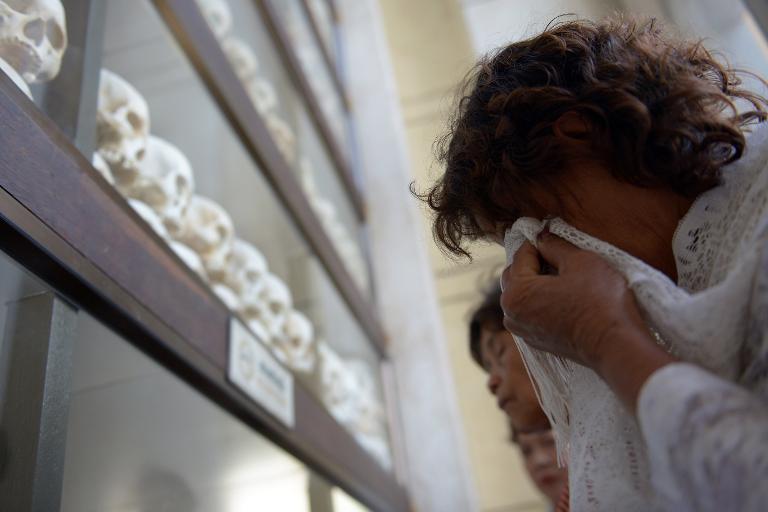 Tearful survivors on Friday marked 40 years to the day since the Khmer Rouge marched on Phnom Penh, ending a civil war but heralding a terror that would kill a quarter of Cambodians and leave the capital a ghost town.

A few hundred people, including monks and elderly regime survivors, gathered early Friday at Choeung Ek — the most notorious of the regime’s “Killing Fields” — on the capital’s outskirts, burning incense and saying Buddhist prayers at a memorial stupa housing the skulls and bones of victims.

The event commemorated the April 17, 1975 triumph of the Khmer Rouge over the US-backed republican army of Lon Nol and with it the start of four years of a genocidal communist revolution.

Initially, the Khmer Rouge were given a cautious welcome by Phnom Penh’s war-weary residents as they entered the city astride tanks, their distinctive red-chequered scarves fluttering behind them.

But soon enough cadres began to evacuate the city of two million people at gunpoint, in one of the largest forced migrations in recent history.

The sick, elderly and very young perished, their bodies littering the roadsides, as “bourgeois” city dwellers were marched into the countryside to scratch a living from the parched soil.

By the time the tyrannical rule of Pol Pot — or “Brother Number One” — was ousted four years later, an estimated two million Cambodians had been killed by execution, starvation or overwork as the Khmer Rouge drove the country back to “Year Zero” through an agrarian peasant revolution.

“Forty years ago Pol Pot turned Cambodia into a hell — a ghost land,” Huot Huorn, 67, told AFP with tears in her eyes after lighting incense for the 36 relatives she lost to the regime.

“I still hate that regime… their sins are vivid in my eyes now. They starved us, jailed people with no food and water until they died… I saw them smash children’s heads against a tree trunk.”

Only after the regime was forced out by Vietnamese soldiers in 1979 did the scale of its atrocities emerge, with the bones of thousands of victims — including children — uncovered at mass graves across the country, including at Choeung Ek.

Many had first suffered at Phnom Penh’s notorious torture house — Tuol Sleng, or S21 — as perceived enemies of the revolution.

The former school-turned-torture-chamber has also been preserved as a grisly testament to the horrors of the era, which ended when the Khmer Rouge were forced to retreat to jungle hideouts.

He was the first person to be held accountable for the regime’s crimes.

Last August the two most senior surviving Khmer Rouge leaders — Nuon Chea, 88, known as “Brother Number Two”, and former head of state Khieu Samphan, 83 — were given life sentences for crimes against humanity. Both have appealed.

Their two-year trial focused on the forced evacuation of Cambodians from Phnom Penh into rural labour camps as well as murders at one execution site.

Cambodians remain divided over how to move forward, with those clamouring for justice countered by others urging reconciliation in a nation where both perpetrators and victims of the regime are still alive.

Phnom Penh has rebounded from the shell of a city left in 1979 to become the driving force of a small but growing Cambodian economy that many hope will lift the nation out from poverty.