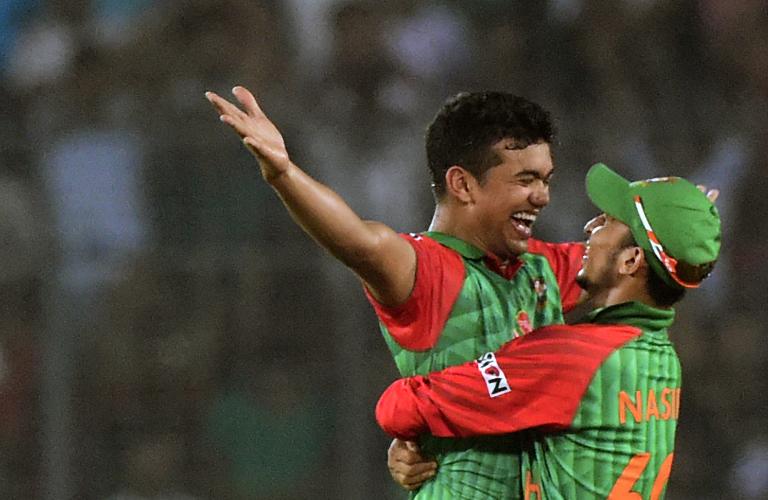 Bangladesh outplayed Pakistan by 79 runs in the first one-day international in Dhaka on Friday, in only their second win over their rivals in 48 games across all three formats.

Tamim Iqbal and Mushfiqur Rahim set up the rare win with impressive centuries as the hosts piled up 329 for six after electing to take first strike at the Sher-e-Bangla stadium.

Fast bowler Taskin Ahmed and spinner Arafat Sunny claimed three wickets each as Pakistan were shot out for 250 runs in 45.2 overs to give Bangladesh the lead in the three-match series.

The only other time Bangladesh have beaten Pakistan was during a group match in the 1999 World Cup in England, but the fired-up Tigers dominated Sunday’s day-night game from start to finish.

Left-handed opener Tamim hit 132 off 135 balls and Rahim smashed a 77-ball 106 to steer Bangladesh past their previous best total of 326 for three against the same rivals in 2014.

The pair added 178 runs for the third wicket — their country’s highest partnership for any wicket — improving upon the 175 by Habibul Bashar and Rajin Saleh against Kenya in 2006.

“It was a real professional performance by the team,” said Shakib Al Hasan, who led Bangladesh in the absence of Mashrafe Mortaza, who served a one-match ban for slow over-rates during the World Cup.

“It was a good pitch to bat on and Tamim and Mushfiq batted really well. After that we just wanted to contain their batsmen and I think our bowling unit rose to the occasion.”

Tamim and Rahim ruined off-spinner Saeed Ajmal’s comeback to international cricket after an absence of eight months due to an illegal bowling action.

Ajmal conceded 74 runs in 10 wicketless overs with his remodelled action to finish with his worst one-day bowling figures.

Bangladesh scored only seven runs in Ajmal’s first four overs, before Tamim and Rahim lashed out at the spin spearhead.

Tamim hit 15 boundaries and three sixes in his fifth one-day century and Rahim smashed 13 fours and two sixes after being dropped by Junaid Khan when he was on 35.

The match marked the start of a new era for Pakistan cricket following the one-day retirement of skipper Misbah-ul Haq and senior all-rounder Shahid Afridi after the World Cup.

Azhar led Pakistan’s batting charge with 72 off 73 runs after first two wickets had fallen for 59 runs.

Azhar shared a third-wicket stand of 89 runs with Haris Sohail to give Pakistan a glimmer of hope, before Taskin removed both batsmen.

Haris hit 51 off 64 balls, but after his departure only debutant Mohammad Rizwan defied the Bangladesh bowlers with a fluent 67.

The match swung decisively Bangladesh’s way when Sunny dismissed Fawad Alam (14) and debutant Saad Nasim in the 40th over.

Taskin finished with three for 42 and left-arm spinner Sunny took three for 47 runs.

Azhar promised a better outing in the next match.

“We made some mistakes in the field and dropped catches at the wrong time, but the credit goes to the Bangladesh batsmen,” he said. “I think we conceded 30 to 40 runs more than we should have.

“But there were some positives for us too. I thought Rizwan batted soundly in his first match. We will rectify our mistakes and come back strongly in the next game.”

The second and third one-dayers will also be held at the same venue on April 17 and 22.