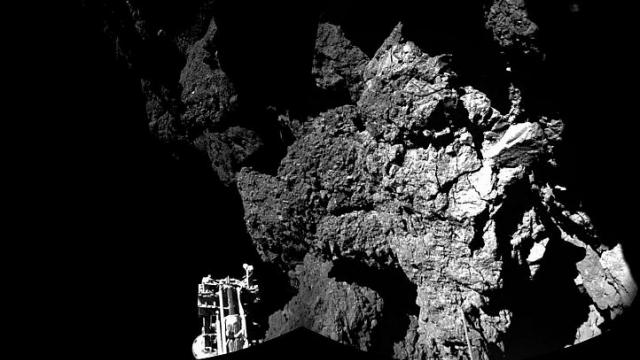 Europe’s comet lander Philae has remained obstinately silent since a new bid was launched to communicate with it, mission chiefs said Tuesday, but chances for contact were improving daily.

Philae’s orbiting mothership Rosetta reopened communications lines on Sunday to listen for any call from the little robot, project manager Stephan Ulamec told reporters at a meeting of the European Geosciences Union (EGU) in Vienna.

“At the moment the orbiter is in listening mode again,” he said.

“We are waiting to get a signal, but yesterday and today so far we did not hear anything.”

Rosetta lowered Philae onto the surface of comet 67P/Churyumov-Gerasimenko on November 12 last year.

But instead of harpooning itself onto the dusty iceball’s surface, the washing machine-sized lab bounced several times before settling at an angle in a dark ditch.

Philae had enough stored battery power for 60 hours of experiments. It sent home reams of data before going into standby mode on November 15.

As “67P” draws closer to the Sun, scientists hope better light will recharge Philae’s solar-powered batteries enough for it to wake up, then make contact, and ultimately carry out a new series of experiments.

“There is a chance to boot (the lander’s computers) probably in the April-May timeframe,” Ulamec said.

“If we also want to communicate, and of course we want to do this, it’s May-June the most realistic dates for wakeup.”

But the window is shrinking. By August 13 the comet will reach its closest point to the Sun, or perihelion, before veering off again into the deeper reaches of space.

“If it is August 14th and we still didn’t wake up, then probably (it) will not wake up any more,” Ulamec told AFP.

But they have still not been able to spot it on photos taken with Rosetta’s onboard OSIRIS camera, nor do they know if it is upright.

Philae has to warm to at least about minus 45 degrees Celsius (minus 49 Fahrenheit) to wake up.

Once it does boot up, the lander would try to make contact with Rosetta once about every 35 minutes.

The team “may consider” simply keeping the line open from here on, said Ulamec, “so whenever the lander is woken up… we will hear it immediately.”

Last month, Rosetta battled breakdowns in navigation and communication with Earth after flying through blasts of dust and gas as it approached within 14 kilometres (nine miles) of the surface of the comet.

ESA announced at the time it would not venture so close again, and the orbiter is now about 100 km from the 67P.

“In the near term, we’ve lost some of the close observations. One thing we were planning to do was a lot more of these close flybys, but at the moment they are deemed to be not possible,” he said.

“We are looking at what can be done to mitigate this. It will become clearer in the next months what we can do.”