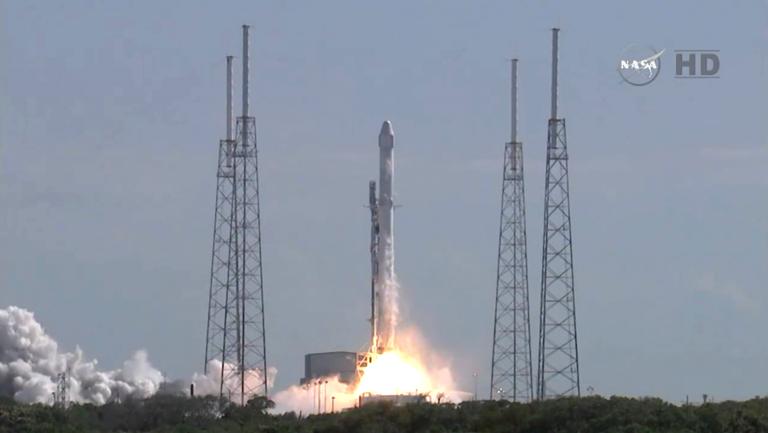 SpaceX’s latest attempt at recycling its Falcon 9 rocket by landing it upright on an ocean platform failed Tuesday, after a successful launch of its cargo mission to space.

A few hours afterward, SpaceX released a blurry image of the rocket appearing to approach the platform in the proper upright position.

“All we have right now is low frame rate video (basically pictures),” added the Internet entrepreneur, who made his fortune as co-founder of PayPal and now also runs Tesla Motors.

“Normal video will be posted when ship returns to port in a few days.”

Musk’s California-based company is aiming to revolutionize the rocket industry by making the equipment as reusable as commercial planes, potentially saving millions of dollars.

Currently, rocket pieces fall into the ocean after launch and cannot be salvaged for another flight.

But SpaceX has a long way to go before it can hone the technology so that the first stage of the rocket can be flown back in a controlled manner and set down carefully on an ocean platform.

The company’s first public attempt in January also failed, when the rocket broke into pieces after colliding with the autonomous droneship, the floating platform which is marked with an “X.”

SpaceX has done other practice runs, in the form of controlled landings over water without a droneship positioned beneath. Landing on a hard surface requires much greater precision.

Musk had said Monday that the chances of success this time were about 50-50, but that the company believes it has an 80 percent chance of success by the end of the year since many launches lie ahead.

The launch of the unmanned Dragon cargo carrier was described by NASA as “flawless,” after it blasted off toward the International Space Station.

The Falcon 9 rocket launched from Cape Canaveral at 4:10 pm (2010 GMT), carrying a load of food and supplies for the astronauts living in orbit.

The cargo ship separated from the second stage of the rocket about 10 minutes into the flight, as planned, and carried on toward the ISS.

The cargo mission is the sixth official journey that SpaceX has contracted with NASA as part of a $1.6 billion deal for 12 such trips.

The supply is on track to arrive at the orbiting outpost on Friday, when it will be grabbed by the space station’s robotic arm — operated by European Space Agency astronaut Samantha Cristoforetti — and guided in for berthing.

“We watched live!” she wrote on Twitter. “Amazing to think that in three days Dragon will be knocking on our door.”

NASA television coverage of the arrival will begin Friday at 0900 GMT, with the grapple expected two hours later.

The Dragon is carrying about two tons of food and supplies, including material for scientific experiments and an espresso machine.

The reusable cargo craft will stay in space for about five weeks, as astronauts reload it with equipment to return to Earth.