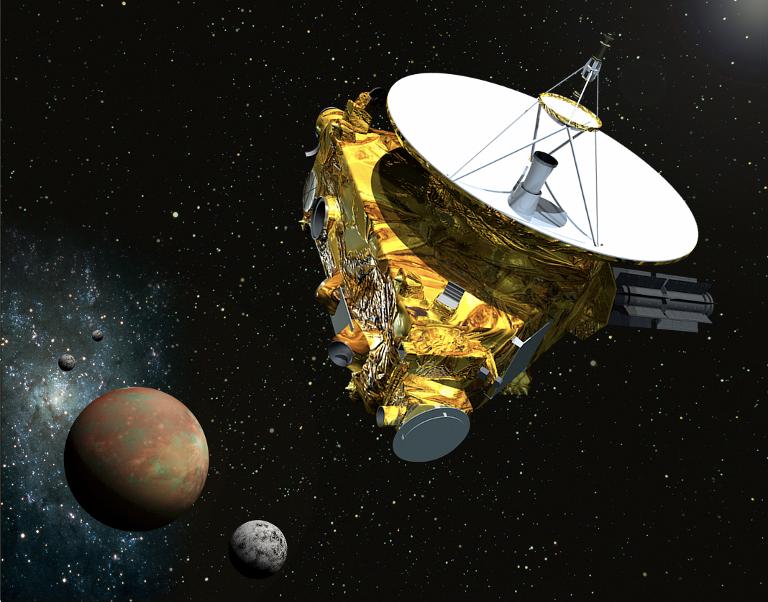 The best picture we have of Pluto is a blurry, pixelated blob, but that is about to change when a NASA spacecraft makes the first-ever flyby of the dwarf planet.

The US space agency’s unmanned New Horizons spacecraft is scheduled to pass by Pluto on July 14, and will send back unprecedented high-resolution images, allowing people to glimpse the surface of the distant celestial body in rich detail.

Pluto was long considered the ninth planet in the solar system, and the furthest from the sun. It was reclassified as a dwarf planet in 2006.

Rocky on the inside and icy on the outside, Pluto has five moons and resides in the Kuiper Belt, a zone of the solar system that is a relic of the era of planetary formation more than 4.5 billion years ago, and contains comets and the building blocks of small planets.

“It sounds like science fiction but it is not,” said Alan Stern, principal investigator on the New Horizons mission.

“Three months from today, NASA’s New Horizons spacecraft will make the first exploration of the Pluto system, the Kuiper Belt and the farthest shore of exploration ever reached by humankind,” Stern told reporters Tuesday.

New Horizons, about the size of a baby grand piano, is the fastest moving spacecraft ever launched, and is traveling about a million miles (1.6 million kilometers) a day on its way to this unexplored frontier.

It is powered by plutonium since the sunlight is so weak at that distance that solar arrays — often used in other kinds of spacecraft — would not work.

Stern described the spacecraft as being “in perfect health” and carrying a “scientific arsenal” of the most powerful suite of seven scientific instruments ever brought to bear on the first reconnaissance of a new celestial body.

New Horizons aims to map the geology of Pluto and its moons. The largest, Charon, is the size of Texas.

Scientists hope to learn more about the atmosphere of Pluto, which is mainly nitrogen like Earth’s, and find out if Pluto and Charon have interior oceans.

The New Horizons spacecraft management team on Earth is aiming for a target point 7,750 miles from Pluto’s surface, but it will not be easy to get into the right position.

“We are flying three billion miles. We have to hit a target that is 60 by 90 miles, and we have to hit it within 100 seconds after nine and a half years. That’s the kind of precision we have to navigate to,” said Glen Fountain, New Horizons project manager at Johns Hopkins University Applied Physics Laboratory.

The spacecraft will continue sending bits of data and photos from the flyby until October 2016.

“We are going to have surprises and discoveries over the next year and a half,” Olkin told reporters.

Already, some images have begun to arrive, and atmospheric studies of the surface ices will begin in May and June, followed by plasma data, geologic and color data in August and more science in September.

But on the day of the closest approach, July 14, there will be no images, she said.

“We need to keep our sights on Pluto, we need to train our instruments on Pluto,” Olkin said.

“We are all going to have to be patient while New Horizons is exploring Pluto.”

After the flyby of Pluto, New Horizons will carry on into the Kuiper Belt to study more about the history of planetary formation.