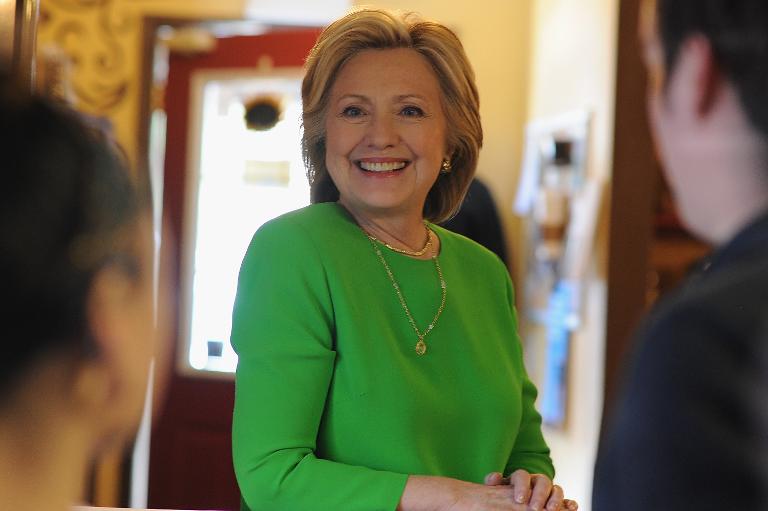 Hillary Clinton’s 1,000-mile road trip brought her Tuesday to a small town in America’s agricultural heartland for the first official stop on what she hopes is her journey to the White House.

After three decades in the public eye, the former first lady, senator and secretary of state wants to reintroduce herself to voters as a down-to-earth champion of middle class aspiration.

So she began by traveling by van across the Midwest from New York to Le Claire, a small town of 4,000 souls in Iowa — the state which will see the first votes in next year’s primary race.

There, on the banks of the Mississippi, the woman who once walked the world’s corridors of power as the United States’ top diplomat, sat down for a tea in Jones Street Coffee House.

The small business opened only six months ago to serve a growing community, an apt symbol of the hopes and dreams of the kind of “everyday people” featured in Clinton’s first campaign ad.

“Hi everybody. Thank you for having us and all of these people. I love it,” she said, greeting Jen and Paul behind the counter and then sitting down for a chat out of reporters’ earshot.

Her guests were invitees — a young mother who volunteers for Planned Parenthood, a student from a campus in nearby Davenport and the president of a university Democratic Party group.

But the intent — as with the two-day drive from Clinton headquarters in hip Brooklyn through the Pennsylvania and Ohio rust belt, to the fields of Iowa — was to show her meeting ordinary voters.

Later Tuesday, she moved on to a community college in the town of Monticello, holding a roundtable with students and educators as she once again set about crafting her image as the champion of ordinary Americans.

“I want to stand up and fight for people so they cannot just get by, but they get ahead and stay ahead,” she said, adding she would seek to change a system where “the deck is stacked in favor of those already at the top.”

Clinton also said she would seek to staunch the flow of “unaccountable money” in a “dysfunctional political system” by a constitutional amendment if necessary.

It is a marked departure from the steely image portrayed in the now 67-year-old’s failed bid for the 2008 Democratic presidential nomination.

Then, she was defeated in Iowa and eventually nationwide by a young Barack Obama, who went on to win two terms in the White House as America’s first black president.

Now Clinton wants to return as America’s first female president to the building where she lived as first lady during her husband Bill’s two presidential terms from 1993 to 2001.

So far, she has no challenger within her own party, so she may have time to run a small, face-to-face campaign in early primary states while her Republican rivals battle each other.

But — the flip side to her frontrunner status — her formal entry into the campaign on Sunday immediately unleashed a ferocious assault on her record and character from the opposing camp.

A quarter-century younger than Clinton, Republican Senator Marco Rubio launched his presidential bid Monday, with a pointed attack on US leadership “stuck in the 20th century.”

Obama has said he thinks Clinton would make an excellent president, but has yet to formally endorse her. And she will be careful to keep a certain distance from his record in office.

Republicans blame the Democratic administration for America’s slow economic recovery in the wake of the recession triggered by the 2008 crash and have vowed to slash government spending.

They also allege that Obama’s foreign policy — partly enacted by Clinton during her time at the State Department — abandons America’s allies and emboldens its foes.

Rubio joins two other Republican first-term senators who are already running: Ted Cruz of Texas, who is also Cuban-American, and Libertarian-leaning Rand Paul from Kentucky.

Others, including former Florida governor Jeb Bush, are expected to join the fray.

An agricultural state with a little more than three million residents, Iowa plays an outsized role in the US political calendar.

It is the first electoral battleground for White House candidates, where voters make their preferences known before any other state in party primaries and caucuses.

While it sends few party delegates to the national Republican and Democratic conventions, the outcome in Iowa helps set the tone of the campaign.

Clinton’s is not expected to stage her first major rally and give her first defining version of her campaign speech until May.