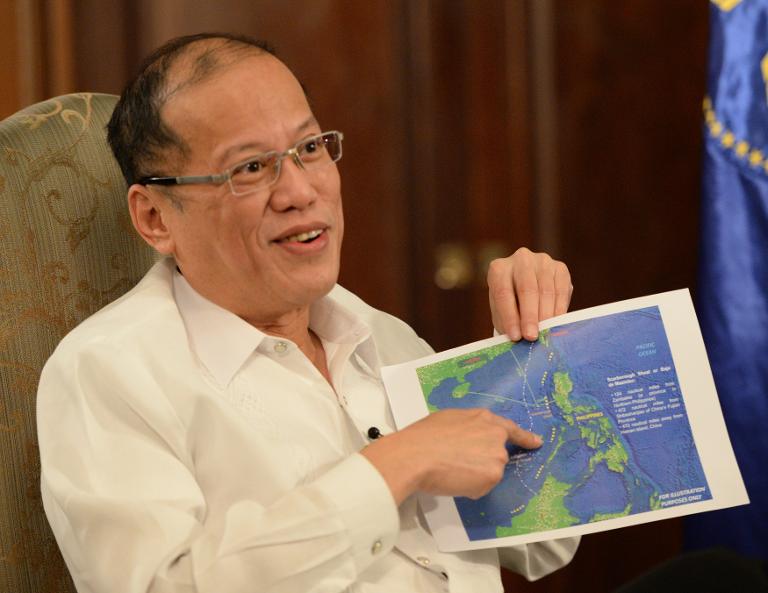 China’s efforts to stake its claim to most of the South China Sea should spark fear around the world, with military conflict possible, Philippine President Benigno Aquino told AFP on Tuesday.

In an exclusive interview, Aquino also warned that China’s increasingly assertive actions raised the spectre of other nations having access cut to vital international shipping lanes and rich fishing grounds in the sea.

“Does it engender fear? Yes, I think it should engender fear for the rest of the world,” Aquino said when asked to assess Chinese government moves in recent years to assert its sovereignty claims over the sea.

Aquino said that while he did not believe China intended to engage in a military conflict over the territorial disputes with the Philippines and other Asian nations, there was a possibility of one breaking out.

“The question of it escalating to something beyond everybody’s control should be at the top of the minds of all world leaders,” he said.

China claims sovereignty over most of the South China Sea, including areas just off the coasts of other Asian nations, using vague demarcation lines that first appeared on Chinese maps in the 1940s.

The Philippines, Vietnam, Malaysia, Brunei and Taiwan have overlapping claims.

The contested claims have for decades made the sea one of Asia’s flashpoints, and tensions have risen in recent years as China has moved to assert its authority over the areas.

Following a tense standoff between Chinese maritime patrol vessels and the Philippine Navy in 2012, China took control of a rich fishing ground called Scarborough Shoal that is within the Philippines’ exclusive economic zone.

Satellite images have also shown China recently embarking on major construction activities to expand Chinese-controlled reefs and islets in the Spratly Islands, one of the sea’s biggest archipelagos.

Some of those images, published this month on the website of the Center for Strategic and International Studies, showed a flotilla of Chinese vessels dredging sand onto a feature known as Mischief Reef.

The reef is about 100 kilometres (60 miles) from the southwestern Philippine island of Palawan, and roughly 1,000 kilometres from the nearest major Chinese landmass.

Images of other outcrops in the Spratlys showed aircraft runways appearing from jungle, smooth-sided solid masses where there once was coral, and man-made harbours replacing natural reefs.

Aquino said China was building two airstrips on the expanded land formations — the first to be sited so far south of the Chinese mainland — which posed major defence concerns for the Philippines.

“With these new features, the two airstrips that come to my mind, once operational, puts into effective (Chinese military) range the entire country,” Aquino said.

“The (Chinese) turnaround time, the sustainability of operations, etcetera, are enhanced by all of these airstrips, and potentially other naval ports.”

Emphasising repeatedly that he did not believe China intended to start a war over the competing claims, Aquino said it was nevertheless successfully intimidating other nations.

“When you have to use the power, then you are really not powerful, when the mere threat of using the power is sufficient to achieve your aims. And that is where they’re successful,” he said.

Aquino also said that if China did succeed in taking control of all the areas of the sea that it claims, there was no guarantee that shipping lanes vital to global trade would remain open.

“There is an estimate of something like 40 percent of world trade passing through this body of water,” he said.

He also referred to China’s announcement it had imposed fishing restrictions in the sea last year, which included foreign boats having to register to fish there.

Aquino said that although China had not yet enforced the requirement to register, it loomed as a threat for foreign vessels.

“At an appointed time they can suddenly say they are enforcing this and everybody who wants to transit has to register with our (Chinese) authorities,” Aquino said.

The Philippines has infuriated China by appealing to the United Nations for a ruling on the Chinese claims. A ruling is expected early next year, although China has refused to take part in the proceedings.

China last week defended its construction work in the Spratlys, while insisting it has sovereign rights to most of the sea.