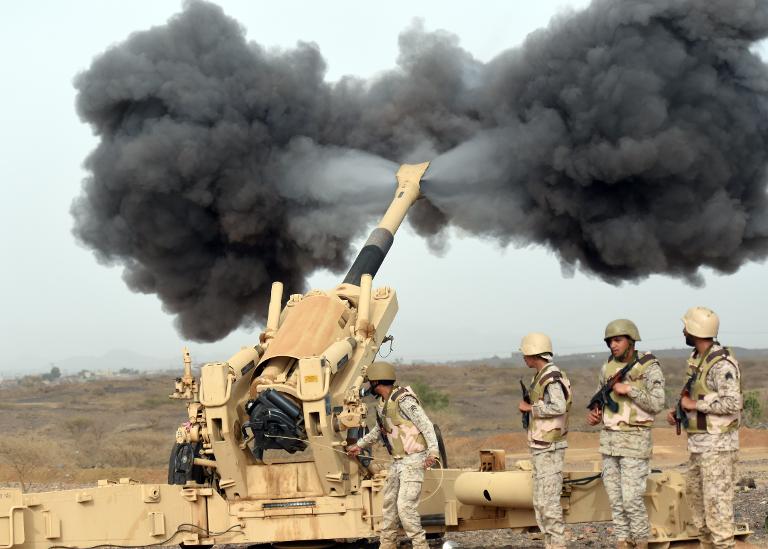 The UN Security Council will vote on Tuesday on a draft resolution demanding Yemen’s Huthi rebels withdraw from territory they have seized and authorising an arms embargo and sanctions against their leaders.

The measure put forward by Jordan and Gulf countries could be blocked by veto-wielding Russia which has friendly relations with Iran, the Huthis’ ally.

It comes as concern mounts of a humanitarian crisis in the country, with aid agencies warning of food shortages and the interruption of basic services in contested areas.

Adwaa Mubarak, a 48-year-old Aden resident, said: “We are unable to leave our houses to buy what we need because of the Huthi snipers.”

The draft resolution would be the first formal measure to come up for a vote in the Security Council since a Saudi-led coalition launched an air campaign on Yemen on March 26.

The text, obtained by AFP, demands that the Huthis withdraw from the capital Sanaa and all other areas they have seized.

It would place Huthi leader Abdulmalik al-Huthi and ex-president Ali Abdullah Saleh’s eldest son, Ahmed, on a sanctions list, imposing a global travel ban and an assets freeze on the two men.

It also provides for an embargo on the sale of arms to the Huthi leaders targeted by sanctions and their allies. But Russia has argued that the embargo should apply to all sides in the conflict, not just the Huthis.

The Security Council vote is scheduled for 1500 GMT.

The diplomatic response intensified as exiled President Abedrabbo Mansour Hadi, in a New York Times op-ed, charged that Iran’s “hunger for power” was behind the Yemen conflict.

He wrote that Tehran was fuelling a “campaign of horror and destruction” by the rebels.

Iran has denied such allegations, and supreme leader Ayatollah Ali Khamenei has condemned the Saudi-led coalition’s raids on Yemen as “criminal”.

President Hadi is now sheltering in Riyadh, where on Monday Yemen’s Prime Minister Khaled Bahah was sworn in as vice president at the country’s embassy.

The Gulf Cooperation Council, which includes Saudi Arabia, welcomed Bahah’s appointment as an important contribution to Hadi’s efforts to “restore security and stability in Yemen”.

Hadi is considered the legitimate head of state by the United Nations, and Saudi Arabia launched the air strikes at his request. Saudi warplanes continued to pound the rebel-held presidential complex in Aden, Hadi’s last refuge before he fled, residents said on Monday.

The Huthis, who have joined with forces loyal to ex-president Saleh, advanced on Aden last month after seizing Sanaa last year.

After 19 days of air strikes, the situation in Yemen is rapidly deteriorating, particularly in Aden where humanitarian groups are struggling to deliver aid.

“Shops are closed. We have a problem of food,” said Marie-Elisabeth Ingres, Yemen representative of Doctors without Borders.

Metaz al-Maisuri, an activist in Aden, said basic services had ceased and there had been a “mass exodus” from the city.

Three children were killed Monday when a shell hit their house in the town of Daleh, north of Aden, an activist said.

The Saudi-led coalition spokesman, Brigadier General Ahmed al-Assiri, blamed the humanitarian crisis on militias, saying they are “now using the schools, the hospitals, the stadiums in order to store their equipment”.

“These militia are making it difficult for the relief teams.”

Assiri warned the coalition was ready to raise its number of daily air sorties, from about 120 now, if needed.

Human Rights Watch urged the coalition to take “necessary steps to minimise harm to civilians” and urged an investigation into “alleged laws-of-war violations”, including the bombing of a displaced persons camp last month.

More than 600 people have died and 2,000 been wounded in the fighting, according to UN figures.