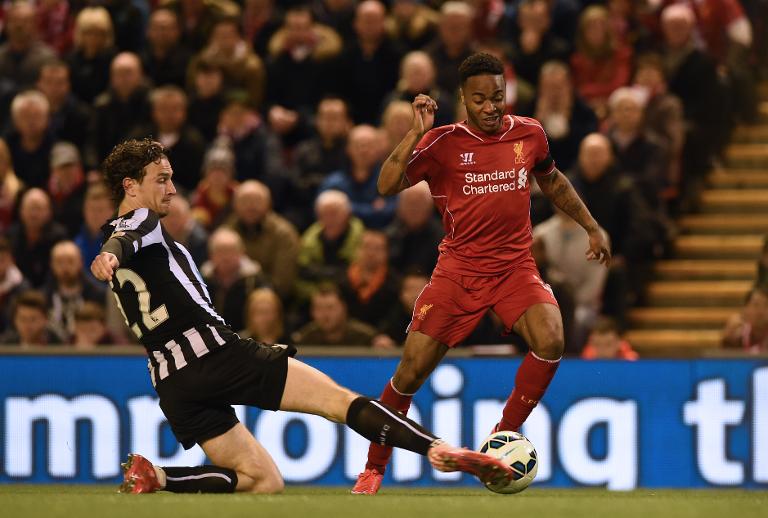 Raheem Sterling helped Liverpool keep alive their hopes of finishing inside the Premier League’s top four and securing a place in next season’s Champions League with a 2-0 victory over 10-man Newcastle United at Anfield on Monday.

The Reds clinched the win thanks to goals from Sterling and Joe Allen as they closed the gap on fourth-placed Manchester City to four points with six matches of the season remaining.

The result also meant Newcastle, who had captain Moussa Sissoko sent off seven minutes from time, have lost their last five league matches.

“I thought we showed attacking intent in the game, won the ball back quickly and controlled the game until the last five, six minutes in the first half, when we started to give the ball away too cheaply,” Liverpool manager Brendan Rodgers told Sky Sports.

Liverpool were without Daniel Sturridge, injured in last week’s FA Cup quarter-final win over Blackburn Rovers that has left him doubtful for Sunday’s semi-final with Aston Villa at Wembley.

However, Jordon Ibe returned to the starting line-up after six weeks out with a knee injury while Emre Can was back from suspension.

Liverpool showed plenty of intent early on as Sterling and Philippe Coutinho dropped deep in search of the ball, eager to run at Newcastle backline.

The home side’s early pressure yielded the opening goal in the ninth minute.

Sterling’s uncertainty over whether he will sign a new Liverpool contract has led to accusations of greed from some Liverpool fans but his ninth-minute goal went some way to restoring his reputation with supporters.

Jordan Henderson’s cross-field pass was adroitly cushioned by Sterling, who cut inside Ryan Taylor and curled a finish high into the net past the outstretched palm of Tim Krul.

The Newcastle goalkeeper was called into action shortly afterwards when a cleverly-worked Liverpool free-kick on the edge of the visitors’ box saw Henderson slip in Coutinho, only for his low shot to be saved.

Lucas Leiva should have increased Liverpool’s lead when he found himself unmarked and got his head on a Henderson free-kick, only for Dutch international Krul to save spectacularly at close range.

Newcastle manager John Carver leapt out of the dugout, arms outstretched, shortly after when the Magpies were denied what appeared to be a clear penalty.

Dejan Lovren, who has struggled in his debut season at Anfield, chopped down Ayoze Perez to the extent that even home fans appeared shocked that referee Lee Mason waved play on.

“I think we were fortunate not to give away a penalty, but thankfully it didn’t go against us,” said Rodgers.

Carver added: “Once we went 1-0 down we seemed to grow in the game. We were on the front foot and we don’t get a major decision.

On the stroke of half-time, home keeper Simon Mignolet made a superb diving fingertip save to push a Perez header over the crossbar.

In the second half, Henderson’s low cross found Sterling on the edge of the six-yard box but, with just Krul to beat, he shot wide.

But his embarrassment was eased when Liverpool scored a second goal with 20 minutes remaining.

A Liverpool corner was sent back into the Newcastle penalty area and Mike Williamson, rather than clear first time, controlled the ball on his chest only for the alert Allen to react with a quickfire shot.

Liverpool’s task in the remainder of the game was much easier when the visitors were reduced to 10 men.

Newcastle midfielder Sissoko went in high on Lucas and was shown a second yellow card by referee Mason, although it could conceivably have been a straight red.