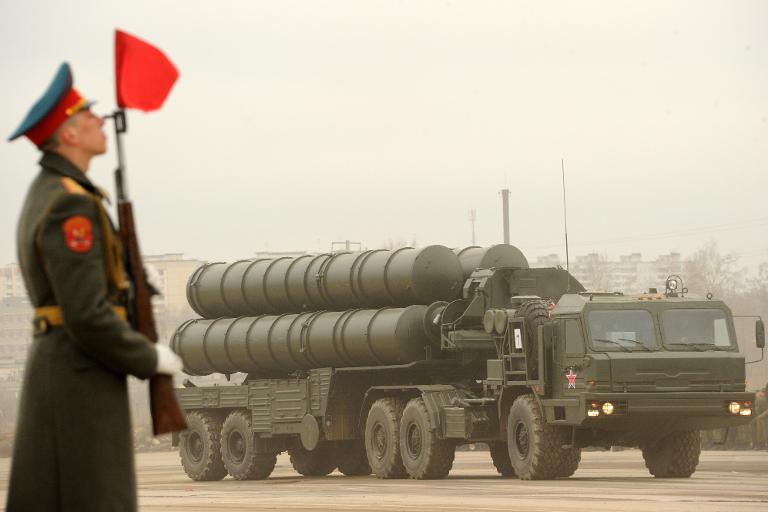 President Vladimir Putin on Monday lifted a ban on supplying Iran with sophisticated S-300 air defence missile systems after Tehran struck a landmark framework deal with the West over its nuclear programme.

While Iran welcomed the development, it sparked strong condemnation from Israel and triggered concern in Washington.

A decree signed by Putin gave the go-ahead for “the shipment from Russia to Iran”, ending Moscow’s self-imposed ban on supplying the surface-to-air missiles to the Islamic republic.

The move comes before any sanctions have been lifted on Iran, with difficult technical talks potentially resuming next week following the April 2 deal with six world powers aimed at curbing Tehran’s nuclear drive.

Russian Foreign Minister Sergei Lavrov insisted the missile deliveries were not covered by UN sanctions, and that the progress in the nuclear talks meant there was no longer any need for Russia to maintain the ban.

He said the missile system was “exclusively defensive” and did not pose a threat to Iran’s foes.

While not the most sophisticated of Russia’s missile systems, the S-300 would bolster Iran’s defences against any attack on its nuclear sites.

Washington said US Secretary of State John Kerry had raised his concerns directly with Lavrov in an early morning phone call.

“We don’t believe it’s constructive at this time for Russia to move forward with it,” said State Department acting spokeswoman Marie Harf.

“We think given Iran’s destabilising actions in the region, in places like Yemen or Syria or Lebanon, that this isn’t the time to be selling these kinds of system to them,” Harf told reporters.

She added, however, that discussions between nuclear experts could resume next week aimed at resolving the technical details of the April 2 agreement.

Israel — which strongly opposes the emerging nuclear accord — lashed out at Russia’s decision, saying it was proof that the Iranians were using the nuclear deal to arm themselves.

“This is a direct result of the legitimacy that Iran is receiving from the nuclear deal that is being prepared, and proof that the Iranian economic growth which follows the lifting of sanctions will be exploited for arming itself and not for the welfare of the Iranian people,” Israeli Intelligence Minister Yuval Steinitz said.

But Iranian Defence Minister Hossein Dehqan hailed the Russian move as a step towards “lasting security” in the region.

Moscow had blocked deliveries to Tehran in 2010 after the United Nations slapped sanctions on Iran over its nuclear programme barring hi-tech weapons sales.

Iran then filed a $4-billion suit at an arbitration court in Geneva for the cancellation of the $800 million order by Russia, which has long been Iran’s principal foreign arms supplier.

The framework nuclear deal agreed in Lausanne this month marked a crucial advance in a 12-year standoff between Iran and the West, which disputes Tehran’s denial that it is seeking to build a nuclear bomb.

World powers must resolve a series of contentious issues by a June 30 deadline for a final deal, including the steps for lifting global sanctions imposed on Iran, and lingering questions over the possible military dimensions of its nuclear programme.

Iran’s supreme leader Ayatollah Ali Khamenei has plunged the accord into doubt suggesting that “nothing is binding”. President Hassan Rouhani has demanded that sanctions be immediately lifted when any deal is signed.

Global powers Britain, China, France, Germany, Russia and the US have said sanctions will only be gradually eased and want a mechanism to ensure they can be swiftly reimposed if Iran breaks its word.

Neither Israel nor the United States have ruled out air strikes if Tehran pursues any development of a nuclear bomb.

But Moscow and Tehran have remained on good terms, with Russia agreeing to build new nuclear reactors for Iran and both sides supporting President Bashar al-Assad in Syria.