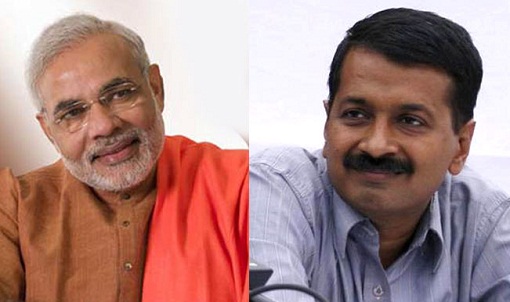 New York: Prime MinisterÂ Narendra ModiÂ and Delhi Chief MinisterÂ Arvind KejriwalÂ have been voted among theÂ 100 most influential peopleÂ in the world in an online poll by readers of TIME magazine.

Russian President Vladimir Putin emerged the winner of this yearsâ€™ TIME 100 readers’ poll. He edged out rapper-singer CL (of the South Korean girl-group 2NE1) to claim the number one spot with 6.95 % of the votes in the final tally.

While the official list of the 100 most influential people in the world will be announced later this week, TIME editors had asked readers to cast their vote online for people from politics, entertainment, business, technology, science, religion and other fields? who “changed the world this past year, for better or worse.”

TIME said the “populist” leader, who swept to power last year on a pledge to boost India’s economic punch, has rolled out key economic reforms and restored close ties with the US, hosting US President Barack Obama in January after a “rock star” visit to the US last year.

On Kejriwal, TIME said after a brief stint as chief minister of Delhi in 2013, he led his anti-establishment Aam Aadmi Party in a “rout of both leading national parties in Delhi assembly election.”

BJP President Amit Shah was also on the initial list but failed to garner enough votes to make it to the top 100.

The list also includes US Surgeon General of Indian- origin Vivek Murthy, a healthcare reform advocate who was elected to his post amid opposition from the national rifle association over comments he had previously made about gun control as a healthcare issue.

Also on the list is Microsoft’s India-born chief Satya Nadella, who TIME said has revitalised the “moribund” software company by introducing new ideas like Office for iPads and prototype virtual reality headset.