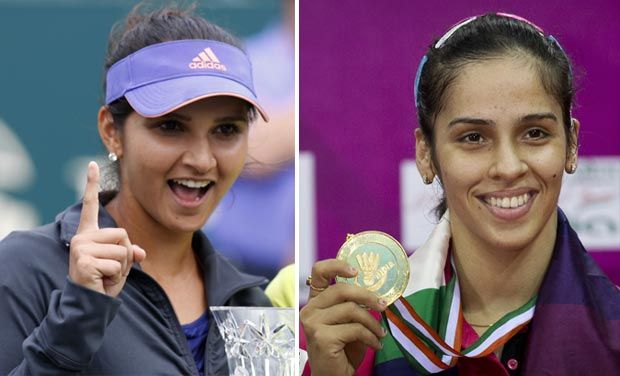 Hyderabad: Is it Saina, or Sania? Itâ€™s one question that perennially becomes the epicentre of confusion for some of the not-so-aware Indian sport fans. To add to it, their sports look similar, they hail from the same place. Whatâ€™s it about the Hyderabadi girls that makes them so darn good at what they do?

It was only a few days back that Saina Nehwal broke into the TV sets, conquered the headlines as she clinched the Number 1 spot in the world badminton rankings. Having an Olympic medal dangling around her neck, itâ€™s no surprise though. But, 2015 seems to have breathed a fresh lease of life into Sainaâ€™s career, which always came to a standstill when the crucial junctures made their appearances. She got over them, a switch of coach helping her cause. And even though sheâ€™s not the no.1 anymore, yet, once there, thereâ€™s no reason why she canâ€™t do it yet another time.

The other Hyderabadi — Sania MirzaItâ€™s difficult to ignore this name. Itâ€™s difficult because as much as her personal life is always under the scanner, the rumour mills churning overtime, conceiving one new story or the other, her professional life likes to keep it simple.Â  She has only one mantra — let the tongues wag — sheâ€™ll let the court bring her elixir.

Sania shot to fame with her unique style, both on and off the field. Even though she began as both a singles and doubles player, she retired from the singles stage in 2013 and continued focusing on her doubles career, peaking with her World No 1 Ranking as Martina Hingisâ€™ partner, knocking out Alla Kudryavtseva and Anastasia Pavlyuchenkova in the final of the Family Circle Cup. With this, Sania inked a new page in history, scripting her name as the first Indian woman to perch on the top branch of the WTA womenâ€™s doubles ranking tree.

This year has been exceptional for Sania. Thereâ€™s nothing that she hasnâ€™t achieved. She began at the 6th spot in the WTA womenâ€™s doubles ranking and her ascent to the top spot began steadily. Saina played with a lot of great players — Â Hsieh Su-wei from Chinese Taipei and American Bethanie Mattek-Sands. It was after this, that Sania paired with Martina Hingis, to bring out the best in her. The pair struck chemistry instantly, winning the Indian Wells title in their first final together.

Miami Masters title followed suit and before they anticipated it, the World No 1 tag was just around the corner. With the recent win in the Family Circle Cup under their belt, theyâ€™d scaled the peak together. 2015 had begun on a promising note, the fulfilment happening just 4 months later.

Success isnâ€™t new for Sania. Neither are controversies. Today the section that hails her as Hyderabadâ€™s daughter had once called her a Pakistani bahu. When appointed as the ambassador of the newly formed state Telangana, she was criticised as not being fit for the honour. That was when a usually composed Sania broke down on national television, stating that sheâ€™s as Indian as anybody else, she didnâ€™t need to prove it.

However, this new high would have definitely put those demons to rest. Meanwhile, dear Sania and Saina, let the party begin!
Â