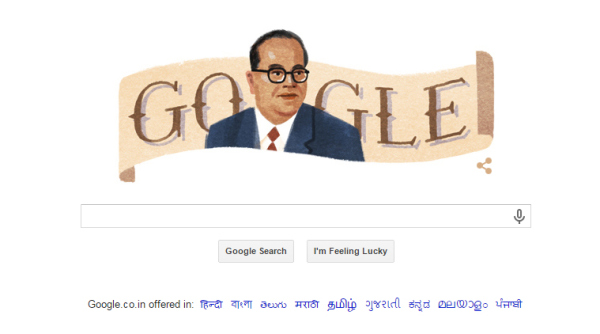 New Delhi: Marking the 124th birth anniversary of Dr. Bhimrao Ramji Ambedkar, Google on Tuesday changed its doodle to an image of the revolutionary Indian leader.

The doodle is featuring in 7 countries apart from India across 3 continents, includingÂ Argentina, Chile, India, Ireland, Peru, Poland, Sweden and the United Kingdom.

The doodle which shows an image of Babasaheb is a tribute to the Father of the Indian constitution who was a front face in the Indian freedom movement and an ardent social reformer who stood for Dalit rights and womenâ€™s empowerment.

Ambedkar who passed away in 1952 had made an unparalleled contribution to the formation of India. Various Indian politiciansÂ also took this occasion to pay their respects to the late leader