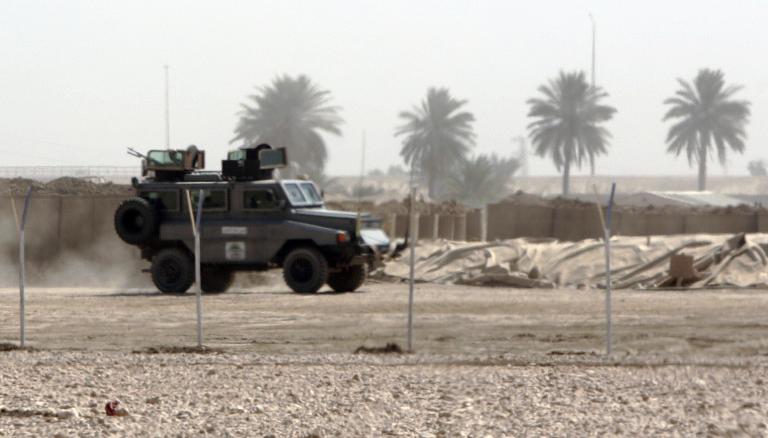 A former Blackwater guard was sentenced to life in prison and three others received 30-year sentences Monday for their roles in a 2007 mass shooting in Iraq that left at least 14 civilians dead.

The four ex-employees of the US private security firm were convicted last October on an array of charges ranging from first degree murder to voluntary manslaughter stemming from the incident in Baghdad’s Nisour Square.

During a two month-trial in US federal court in Washington, a jury heard how the four defendants opened fire with sniper rifles, machine guns and grenade launchers in the bustling square as they escorted a diplomatic convoy.

A toll compiled by American investigators recorded 14 deaths and 17 injured. Iraqi officials say 17 civilians were killed, and 18 injured in the shooting.

US federal judge Royce Lamberth sentenced Nicholas Slatten, who was accused of firing the first shots, to life in prison on the first-degree murder charge.

The other three defendants — Paul Slough, Evan Liberty and Dustin Heard — received sentences of 30 years, the minimum by law for the charge of using a machine gun in a violent crime, plus a token additional day for each of the other counts.

“The wild thing that happened here can never be condoned by the court,” Lamberth told the court, saying he had taken into account statements made on behalf of the four defendants.

The killings on September 16, 2007 deepened Iraqi resentment of America’s involvement in the country.

In final statements, all four defendants protested their innocence and asked for leniency. Slatten asked for the verdict against him to be overturned.

But Lamberth said he fully supported the jury’s decision.

Before the killings, Slatten allegedly told acquaintances he wanted to “kill as many Iraqis as he could as ‘payback for 9/11’,” according to court documents.

Relatives of two of the Iraqi victims spoke before the sentencing about the loss of their loved ones.

“I have a question for them,” said Fatimah al-Fadwi Kinani, the tearful mother of a nine-year old boy killed by a machine gun round, speaking through an interpreter.

“I just want to know why they killed my son? Why did you guys kill my son?” she said.

The boy’s father, Mohammed al-Kinani, called on Lamberth to “show Blackwater and (former CEO) Erik Prince what the law is.”

The courtroom was crowded with supporters of the four men, some wearing black sweatshirts emblazoned with the Blackwater name.

Testimonials by friends and relatives portrayed them as upstanding former military men who bore no animus toward the Iraqis.

“Mr Kinani,” said Paul Slough, turning in the man’s direction. “I could not and did not kill your son.”

Slough and his lawyers contended that Ali al-Kinani was killed by a black-tipped, armor-piercing round from an M-240 machine gun, while Slough was using a different kind of ammunition.

It was the closest any of the defendants came to an apology for the 10 to 15 minute explosion of violence that trapped civilians in cars, trucks, buses and unable to flee the onslaught in Nisour Square.

The four insisted they were responding to incoming fire. No eyewitness testimony supported that claim during the trial, Lamberth reminded them.

“I feel utterly betrayed by a government I served honorably,” Slough said.

Liberty insisted: “With God as my witness, I shot at two people in Iraqi uniform who were shooting at me.”

Their lawyers asked Lamberth to show leniency, arguing that the guards used weapons issued by the government. They had put their lives on the lines, and had been asked to make “split second decisions in the most dangerous city on earth,” said Slough’s lawyer, David Schertler.

The judge rejected that argument but agreed to limit prison time in the case of all but Slatten to the 30-year minimum, considerably less than the stiffer sentences sought by the prosecution, which ranged from 47 to 57 years.